UN review puts US on the hot seat about torture treaty 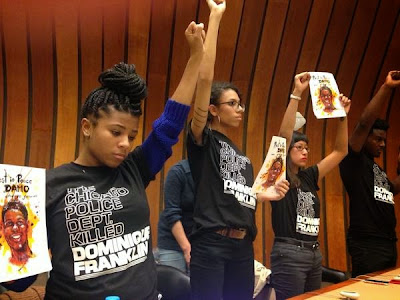 Over the last two days, US State Department representatives have tried to answer questions from a United Nations expert panel in Geneva about our compliance with our obligations under the Convention against Torture and Other Cruel, Inhuman or Degrading Treatment or Punishment (often called CAT).

Their job hasn't been easy. It's hard to put lipstick on a pig.

Legal advocates who have long represented Guantanamo prisoners and other human casualaties of our global war on our fears raised the resort to torture the Prez has admitted, the use of brutal force-feeding on inmates, and indefinite captivity.

Advocates for US domestic prisoners charged that widespread use of solitary confinement violates our treaty obligations. So does police brutality.

Numerous civil society groups who know perfectly well that they are not heard within the United States -- gays subjected to "reparative therapy," transgender people, homeless citizens, Chicago youth members of We Charge Genocide (pictured) -- seized the opportunity to make their case.

Mike Brown's parents came from Ferguson to testify to the brutality of militarized law enforcement.

The best account of the two-day hearing I've seen is from Newsweek. Extensive excerpts follow:The United States Human Rights Network took the lead in this country on organizing community groups for this periodic review.

I wonder how much real power the UN has about anything. I guess they are down on US states, like Oregon, where the citizens have voted to legalize pot. Since it's considered a dangerous, controlled substance at the UN, they are not happy and trying to decide what they will do about it-- if anything. I was annoyed with them because alcohol is dangerous too if it's misused. In some countries heroin has even been legalized but I never heard them going after them. I have never used pot although my kids have. I voted though to legalize it due to the ridiculousness of putting people in prison for its use/sale when without a doubt alcohol has the equal potential to cause grief. Of course, I've heard of some who would like to have another Prohibition including both-- It was so successful in the 30s.

The UN, as it functions today, is another of those places I tend to think more to the right and irritate the left. It is not that I would not like to see a world effort to make things better but not sure, humans, being what they are, it ever works out. Giving a worldwide organization power over our country isn't appealing to me

The UN has no power over us. We signed a treaty and made some promises about our behavior -- the only influence the rest of the world has over our compliance is to withhold their good opinion. They often do. Since the Declaration of Independence, we've thought our legitimacy had something to do with the "opinion of mankind." This seems an outlandish idea, but has more potency than we often realize.