News media report that one million residents of the Catalonia region of Spain have participated in an unsanctioned, non-binding referendum on independence today. That is, they've been part of a highly organized, non-violence protest led by civil society organizations.

I don't claim to understand much about the drive for Catalan independence. The region is more industrialized and more prosperous than much of the country. Many people believe they pay more into the central state than they get back. The area has a somewhat distinct history from some other parts of Spain having resisted fascism longer and been more viciously repressed by last century's Franco dictatorship. Or so Catalans say.

The BBC tries to explain the area's strong independence sentiment:

There is also a pervasive sense that the central government never listens to Catalans and treats them with contempt - menyspreu, a much-repeated [Catalan] word here. 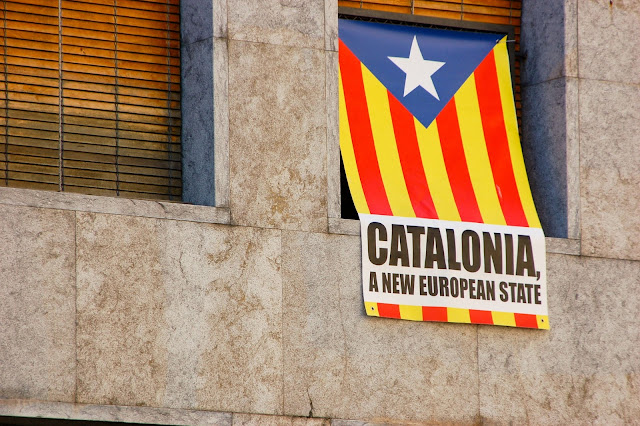 And the Catalan language really is distinct from either Spanish or French. Signs are often in both Spanish and Catalan or even just Catalan. This banner we spotted on a public building in Girona last year reveals something of the contradictions in the situation.

Pro-independence Catalans very much want to be part of Europe and are willing to express themselves in English to promote the cause -- the cause of maintaining local distinctiveness. I don't think that Catalans are alone in our global society in struggling to navigate these contradictions. In fact, I suspect they are more sophisticated than most of us.
Posted by janinsanfran at 7:20 AM