Should we leave our future to the machines? 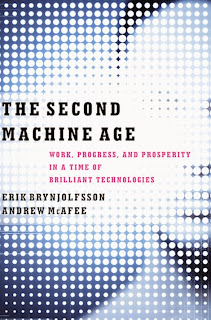 It would be easy, but far too simplistic, to write off Erik Brynjolfsson and Andrew McAfee, authors of The Second Machine Age: Work, Progress, and Prosperity in a Time of Brilliant Technologies, as mere cheerleaders for our new digital masters.

Though there is plenty of cheerleading, this is nonetheless a fascinating, very clear exposition of where our technologies are taking human societies (climate collapse always excepted; these authors make no mention of that dire probability). They contend that we are in the midst of an historical "inflection point." For most of our existence, the conditions of human life did not change much: we struggled along to feed, clothe and shelter ourselves in relatively small societies. In the last 200 years, the steam engine -- a marker for the increase in mechanical power that we call the industrial revolution -- led to a take off in human well-being, population numbers, wealth, and a better life for far more us us (especially if you don't factor in mass extinctions and pollution of the planet). Today the digital revolution -- the exponential, embedded expansion of machine power and capacity -- is driving us to a new plane of existence.

These authors survey some of what is possible: driverless cars, effective translation and writing as good as humans produce, 3-D printing. The goodies are wonderful. We want them!

And then they take up what they call "the spread" -- the fact that innovations with the power and capacity they describe will lead to societies in which a few people (I'd call them the one percent and their sycophants but they don't) have wonderful lives and most of a growing human population is superfluous. And they make recommendations: suddenly we're back in the drab land of imaginable (almost) public policy: universal pre-K and a negative income tax.

I find it impossible to believe that their remedies are nearly up to the tasks assigned to them. Maybe our digital masters can figure out to do with superfluous humans? Somehow that prospect doesn't look good.

This is a worthwhile book, for what it describes of where we are going. Making the digitized society livable for most is another matter; that isn't going to come from the business schools these authors derive from.
Posted by janinsanfran at 8:28 AM

Well, the problem is that a new group of people have fallen for their own propaganda!