A drunk, an addict, a father and a journalist

David Carr's media column for the Times only became a regular stop for my browsing shortly before his death last February. As journalism struggles to find a way to pay for significant reporting, he tried to keep it real. The columns at the link are still worth reading: informative, tough, and compassionate. 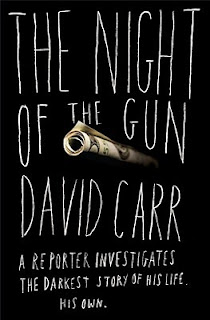 I knew he had written a memoir of his years as an addict and drunk. I didn't want to read it. I've never been much interested in white, straight, mid-Western boozer males.

But after he died -- in journalistic harness, collapsing at his desk -- I decided to give the book a chance. It is titled The Night of the Gun: A reporter investigates the darkest story of his life. His own. As far as Carr's life story goes, I was right to avoid it; descent to the bottom is not interesting except to the participants.

But there's more going on here. Carr really did give his memories of multiple foggy episodes the full fact-checking treatment. The title derives from his discovery that his memory of his best friend pulling a gun on him during a particularly extreme binge was completely false. He was the one who had brought the gun into their quarrel. There's chapter on chapter of that sort of thing, including some woman beating and a lot of crack cocaine.

Still, why might anyone want to read this painful book? Perhaps because it is both wise and possibly truthful, or at least it expands a reader's apprehension of the categories of human truth.

Regular people, people who are not drunks or addicts, will drink too much, get a horrible hangover, and decide not to do it again. And then they don't. An addict decides there is something wrong with his technique ...

Somehow, twin daughters who needed him and a stalwart (second) wife helped Carr pull out of the pit he dug himself. Journalistic talent clearly helped too. Woes await the recovering drunk who isn't employable ...

And even Carr's description of his bottoms has its endearing moments. During one crazed moment, he describes himself alone, talking to his dog, Barley, a Corgi mix.

... I'd ask her random questions. Barley didn't talk back per se, but I saw the answers by staring into her large brown eyes.

Am I a lunatic? Yes. When am I going to cut this shit out? Apparently never. Does God see me right now? Yes. God sees everything.

Sobriety didn't come for a long, long time, but when it came, Carr relished being "normal." He concluded:

You are always told to recover for yourself, but the only way I got my head out of my own ass was to remember there were other asses to consider.

I now inhabit a life I don't deserve, but we all walk the earth feeling we are frauds.

***
I read this book by ear -- and I do not recommend that version. When I borrowed the hard copy from the library, I was delighted to discover it was full of pictures of people, police reports and newspaper clips that are not to be missed.
Posted by janinsanfran at 5:30 AM

Email ThisBlogThis!Share to TwitterShare to FacebookShare to Pinterest
Labels: booktalk, gone but not forgotten, journalism