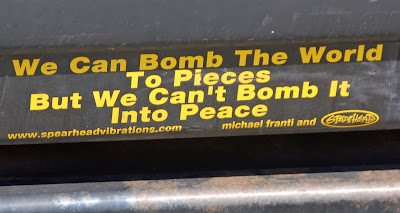 Kevin Drum makes a plausible prediction about next year's presidential race (once we get through the foolishness and the Republicans settle on someone):

Right now, everyone thinks the Iran treaty is going to be the big foreign policy issue of next year's election. Maybe. But I think interest will fade after it's a done deal. Instead, ISIS will probably dominate the conversation, and Republicans will have to put up or shut up. If President Obama's limited strategy of training and airstrikes isn't working, are they willing to commit to a large-scale intervention using ground troops? That's likely to be the big foreign policy issue of the election.

He's riffing off Professor Stephen Walt's sensible observation that the entity called ISIS, or ISIL, or Islamic State or Daesh seems to be successfully establishing itself as the effective government of a goodly swath of Sunni Muslim former Syria and Iraq and isn't going to be dislodged by U.S. bombing and ineffectual, fragmented enemies. As Sarah Chayes would highlight, at present it has banished a humiliating, exhausting culture of corruption from its conquests and that would give any governing authority a novel legitimacy. Even the New York Times documents this:

... its officials are apparently resistant to bribes, and in that way, at least, it has outdone the corrupt Syrian and Iraqi governments it routed, residents and experts say.

“You can travel from Raqqa to Mosul and no one will dare to stop you even if you carry $1 million,” said Bilal, who lives in Raqqa, the Islamic State’s de facto capital in Syria, and, out of fear, insisted on being identified only by his first name. “No one would dare to take even one dollar.”

... increasingly, as it holds that territory and builds a capacity to govern, the group is transforming into a functioning state that uses extreme violence — terror — as a tool.

I hope we can be confident that, whatever provocations the aspiring caliphate may pull off before next year, the outgoing Obama administration is unlikely to dump U.S. troops into the fray. The Prez seems determined as I write to go out without "doing stupid shit", an admirable policy framework we could use more of.

But Drum may be right that an argument about whether the U.S. should go crashing into another war could become a central issue next fall -- and the idea has disquieting implications.

For Hillary Clinton, this will require some fancy footwork. Aside from her Wall Street ties, distrust of Hillary over her hawkishness is probably her greatest liability among Democratic voters.

On the other hand, we can count on any Republican to promise to (re)establish imperial dominance by maximum force and violence. Anything less would unmanly, un-exceptional, unAmerican. And just consider, that nominee could be named Bush ...

People who care about peace can't allow this horror show to develop without loudly raising up a picture of a more peaceable posture. Otherwise we'll be as organizationally enfeebled as we found ourselves after the 9/11 attacks.
Posted by janinsanfran at 5:00 AM

We are unlikely to have a choice that we will be happy about but there is only one way to vote if someone is a progressive. It has to be Clinton as the alternative is frightening. I just wish Sanders was more of a viable alternative but even many progressive Democrats don't feel he can win. He's way out there on the left where only the far left wants what he espouses. Still, if he got the nomination, he'd also be the only alternative as there is no way a Republican is a viable option-- not any of them.

Somewhere I read that they proposition that Trump is a stalking horse to get Bush out and leave it for Walker. Now that's scary.

What are your thoughts on Rand Paul, who started out as a non-interventionist, but has become more hawkish (though less gung-ho than other GOP candidates)?

Hi Brandon: I am completely distrustful of Rand Paul. At one time, he was somewhat consistent in his general non-interventionist stance, but you don't win a Republican nomination unless you kowtow to U.S.-sponsorship of Israel -- and he does now. I'd be shocked if he voted for the Iran treaty, for example. We'll see.

I also find it hard to credit his "outreach" on race issues. The sort of libertarianism he stands for always sticks up for private property against government intervention to move us toward equality of opportunity. We still need public accommodations law, for example. These social norms don't defend themselves in an unregulated market.