Rumors of war over the South China Sea

As I walk around San Francisco, I often bemoan how soaring land values are transforming this peninsular city. There's construction everywhere and it sure doesn't look as if there will be room for immigrants and workers as it gets done. But there are still an astonishing diversity of people and concerns. Not infrequently, I come home from walking a precinct and rush to the web for answers: what are these residents so stirred up about? 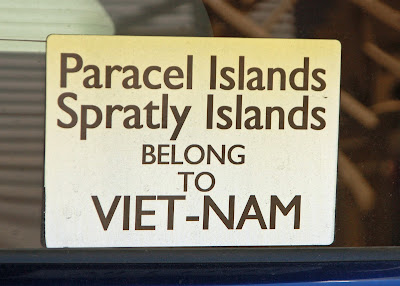 Allow me to share what I learned from my superficial research into that sign. The Paracels look to be off Vietnam, but were taken over definitively by the People's Republic of China in 1974 after a naval battle. Though there's not much to the islands, including no reliable fresh water, the Chinese are developing them as a tourist destination. Meanwhile both Taiwan and Vietnam maintain the Paracels are part of their countries.
The Spratly Islands seem even less likely to be objects of international strife: no people, no arable land, and little water. All that's there would seem to be fish and guano, all that is except the possibility there is undersea oil.

That last presumably explains why six nations claim these isolated reefs: Brunei, the PRC, Malaysia, the Philippines, Taiwan and Vietnam. All of them maintain some military presence on the islands and there have been several skirmishes among the claimants since 1946. Most recently, China has been dredging and building an airfield which the other claimants consider evidence of aggressive intent. The U.S. and China engaged in some classic jockeying for position over the region this spring. Presumably the U.S. Navy is being deployed to protect the possibility of U.S. oil operations.

Just as the Quemoy and Matsu crisis was scary background noise for those of us who grew up in the 1950s, the Paracels and Spratlys are simmering hot spots today for those aware of these remote atolls. 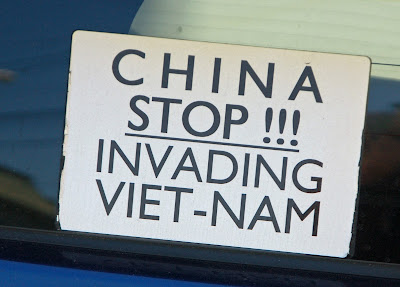 UPDATE: Just in case anyone arrives here from Google -- the New York Times has published a detailed explainer and maps about these island.
Posted by janinsanfran at 5:00 AM