Lust for more war is looking like a partisan issue 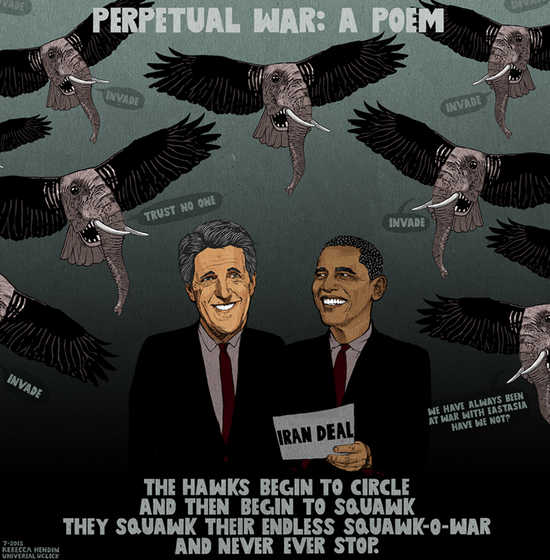 And that is not a good thing.

As the Times reported yesterday, Senate Republicans seem to be working themselves up to repudiate the Iran nuke deal.

... the vast majority of Republicans appear to have made up their minds before a single classified briefing, hearing or visit with administration officials.

Fortunately, they can posture all they like and hold symbolic votes against the agreement, but unless they can bring a lot of Democratic Congress members to join them, they can't stop it.

But in general, at this moment, the closest thing we have to a bulwark against more stupid shit -- against another on-the-ground U.S. adventure in the Middle East -- is that Democrats still oppose throwing masses of soldiers into the meat grinder. A new Pew Poll shows strong ongoing anxiety about the Islamic State. Hey, we're still suckers for beheading propaganda. But 49 percent of us still don't want to send U.S. troops, while 44 percent think that would be just the thing.

What's scary about these numbers is that 63 percent of Republicans are panting for a ground war while the same percentage of Democrats are saying no way. Independents break more evenly, though slightly against.

If there is any good news in this survey, it is that young people under 30 are far more suspicious of any drive toward war than their elders. White men are the most likely to want to attack the Islamic State, while women across races and people of color are a little more cautious.

Facing the 2016 election, it is important to point out loudly and clearly that Republicans seem to be awfully casual about leading the U.S. into a hornet's nest. Republicans -- both the politicians and most of their constituents -- are currently a war party.

But probably even more important, Democrats need to push Hillary Clinton to commit to using international diplomacy to advance U.S. policy aims instead of sending in the Marines (or more likely JSOC). Why she's even got the background to do it. We rarely get a President with that experiential skill set.

It's interesting, in an ugly sort of way, how they want wars, but then want the poor to pay for them in every way possible :(