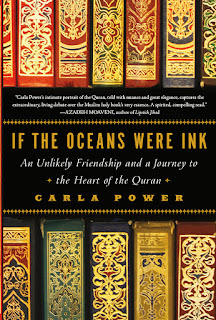 Carla Power is a U.S. journalist, a former Newsweek correspondent who now writes for Time. She enjoyed a curious and lucky upbringing in a series of Islamic countries in less conflicted times. This book, If the Oceans Were Ink: An Unlikely Friendship and a Journey to the Heart of the Quran, is a pondering on a year's conversations with Sheikh Mohammad Akram Nadwi, a longtime friend and colleague from a shared Oxford academic project.

The Sheikh, educated in madrassas and at university in his native India, is a deeply immersed scholar of his tradition who also serves as a day-to-day religious leader to many British Muslims. He lectures and answers questions from students that range from theological puzzles to whether it is licit to use hair dye. To a Western observer, he seems an exotic figure because he has recovered the stories of thousands of Muslim women who historically played the roles of jurists and interpreters of belief. His teaching about Muslim women separates out what he considers cultural accretions to Islamic practice from a core system of belief that he finds in the Quran. But he is not some kind of modern re-interpreter of the faith -- he's a traditionalist.

Power often finds the gulf between the way she thinks and what the Sheikh teaches wide -- possibly unbridgeable. She writes about hearing the Sheikh provide counseling to the parents of a young girl who had become pregnant without marriage. His whole concern was for helping the girl and the family find practical ways to go forward together, despite allowing no slack for such loose morals. Power explains:

In my creed, sex, drugs and rock and roll, and any number of other explorations were fine, so long as nobody got hurt. Such tolerance derived from the assumption that this life is all we have and that every individual has freedom. Akram's tolerance came from a belief in just the opposite: in a God-centered universe, nobody has freedom and nobody has the right to judge others. That is God's job.

The impression that I have long had of Islam is that, more than European Christianity, it demands communal solidarity and equity among all the people (at least those within the faith circle.) No unjust judges here! Thus I was interested in this exchange:

I [Power] had always been taught that justice was the cornerstone virtue of Islam, occupying much the same position that love does in Christianity. Prophets were sent to bring justice to the people through their messages. Polygamists are counseled to be just with their wives, and merchants to make fair deals in the marketplace. "A just leader," the Prophet Muhammad is reported to have said, will be "the most beloved of people to God," while the "most hated" would surely be a tyrant. ...

I called the Sheikh to ask about justice. "It's the basic tenet of Islam, right?" I asked.

There was justice, ultimately, he said, but it would not necessarily arrive in this life. Allah would provide it in the Hereafter.

Sheikh Akram is a quietist. His religion is all about living in submission to God, to Allah, come what may. That is, after all, what the Arabic word islam means. He projects simplicity and calm.

Yet to Power -- and to me -- the contradictions held inside his lived belief remain unfathomable. This book left me reflecting on whether perhaps I find that true of single minded practitioners of any religious tradition. We live these things rather than think them ... yet there are scholars and counselors and prophets and holy fools. This was a book to read slowly and allow to seep inside. It stirs more questions than answers. They seem gentle, healthy questions -- something of a rarity in our noisy lives.
Posted by janinsanfran at 9:13 AM