I complain a lot about how San Francisco is losing its soul. We mostly all do around here. And we're not wrong. The big tech money is sanitizing the place. 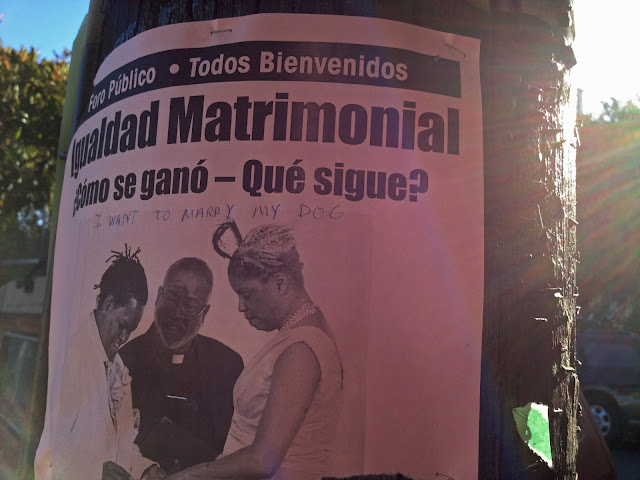 But we do still encounter improbable reminders of some decidedly non-standard cultures. Let's take apart this snippet of a poster I noticed not far from my Mission home this morning.

If you are not familiar with the genre, you may not recognize this as the effluent of one of two competing Trotskyist sectlets that hang on in the city. They use very similar typography, so are instantly recognizable to those of us who've been afflicted by them for years. I'm not going to link or tell you which one.

In case the Spanish is not understandable, it reads roughly "Marriage Equality -- how was it won? what does it mean" and advertises a public meeting about this topic at which "all are welcome." Whoever tore off the bottom of the poster spared us any further information.

This is still a neighborhood where a significant number of residents speak Spanish, so the language is not inappropriate. Apparently our sectarians are looking to attract Spanish speakers. Good for them.

On the other hand, very few people around here look like the lovely Black lesbians in the photo (more's the pity.) And somehow I doubt that people who are attracted by the topic are looking for a friendly, affirming clerical-collared pastor to marry them (though there are such persons available in the 'hood if that's someone's thing.)

Finally we get to the response someone has scrawled: "I want to marry my dog..." This might be an expression of hostility -- or, then again, perhaps not. Maybe someone really does want a movement that would enable her to marry her dog? If this is the coming thing, you saw it first on a poster in San Francisco's Mission.
Posted by janinsanfran at 5:00 AM