Wayback machine: unconvincing lipstick on too many pigs 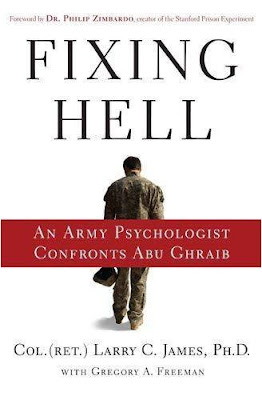 A psychologist is a mental health professional who holds a doctoral degree (not medical) earned by studying some aspect of what makes the human mind tick. Col. (Ret.) Larry C. James Ph.D. was the professional sent by his superiors to the U.S. prison camp at Guantanamo and then to Abu Ghraib in Iraq to clean up the public relations and all-too-real messes that the Bush administration's "war on terror" had wrought. He describes his work clearly and cogently in Fixing Hell: An Army Psychologist Confronts Abu Ghraib.

He seems a decent guy, smart, a capable leader who cared about the U.S. troops he found in these hellholes. When he arrived in Guantanamo in January 2003, a younger psychologist he had mentored, Major (Dr.) John Leso, told him what he had been seeing.

.. .The bar for what might be considered abusive was raised higher and higher, and the leaders at the base turned their backs on conduct that was, at a minimum, questionable. The interrogators learned that they could try pretty much whatever they wanted to get the prisoners to talk, and a lack of good information often just spurred them to attempt something more extreme

... he had received increasing pressure to teach interrogators procedures and tactics that were a challenge to his ethics as a psychologist and moral fiber as a human being. ... He witnessed many harsh and inhumane interrogation tactics, such as sexual humiliation, stress positions, detainees being stripped naked, and the abuse of K-9 dogs to terrorize detainees

James takes pride in improving conditions at Guantanamo for three underage detainees; the U.S. eventually shipped them home after a year. We are not told whether our government ever came up with any rational basis for holding these young men.

He reports anecdotes about trying to teach untrained, immature soldiers how to extract information without abuse, probably succeeding in mitigating the worst violence.

Much of the culture at Gitmo in 2002 and 2003, perhaps due to the anger over 9/11, involved projecting one's rage onto the detainees.

It is hard to believe that James' intervention reached deeply into the structure of the place however, as we know from Mohamedou Ould Slahi’s Guantanamo Diary that the Mauritanian was being tortured while James was at the base.

After Seymour Hersh blew the whistle, including pictures, on torture at Abu Ghraib prison in Iraq in 2004, James was sent to try to clean up that U.S. embarrassment. On first inspection of the place, he retreated to his room to cry and pray. And then he sussed out the totally screwed up realities of the U.S. invasion and occupation that revealed themselves at that iconic location: the hopeless ignorance about Iraq and Iraqis at all U.S. levels; the absence of a clear mission after Saddam was blown away; the rafts of generals, bureaucrats and contractors who hunkered down in air-conditioned Baghdad quarters, providing little direction to revolving groups of GI personnel suffering in the field on one year deployments. Because the U.S. political leadership had seen their project delegitimized by the torture story, and because the military was concerned for its "honor," James' demands for resources, better officers and more training probably had some positive effect at Abu Ghraib. But, of course, since the army still didn't know what it was doing, waves of new prisoners -- mostly guilty of no active wrongdoing -- kept washing through the system, making new enemies for the occupation and of the occupiers with each raid and detention.

James is very affecting when he writes about what our wars do to our own soldiers. He recounts how a warrant office and interrogator

often talked about how she had seen two interrogators blown apart by a mortar attack. ... "Sir, they died right in front of my eyes ... One of their body parts were laying on the ground. I stood there dazed when the medics picked them up and put them in a body bag. After a while, I couldn't do my work and I just cried a lot. Sir, we didn't have no psychologists, no chaplains or anybody to help us deal with this. Colonel, sir, it was shameful how they just left us there with no help."

James agrees. This neglect was shameful.

Precisely because James is such a sensitive observer of the harm done to U.S. troops, his mystification about the motivation of men he labels Taliban (how did he know?) in Cuba and among Iraqis at Abu Ghraib strikes me as strange. He does know he has seen hate before: when a prisoner called him "kaffir" and promised to slit James' throat,

he reminded me of the hate I saw in the eyes of many Klansmen as a young [black] boy in Louisiana. Also, like the Klansman of old, no reason, no logic or amount of information could change this detainee's mind nor clear his heart of the hate and evil he spewed. His rage was foul and almost inhuman.

While I sure as hell wouldn't want to meet this prisoner, his rage seems utterly human to me. Alien beings had crashed through his world, destroyed the structures of livelihood, family and security and added to the insult by presenting themselves as models of decency and civilization. Most of us would feel pretty murderous.

One of Colonel James' objects in this book is to rehabilitate Major General Geoffrey D. Miller who commanded at Guantanamo in 2002 when Secretary of Defense Donald Rumsfeld was pushing for abusive interrogations and was then sent to Iraq to "GTMO-ise" detainee treatment. James' mentions none of this, praising Miller repeatedly for supporting James' work. Human rights organizations view Miller as one of the most visible authors of the U.S. torture policies.

Since James' book is a call for command responsibility to prevent crimes incident to war, his defense of Miller rings hollow. And, though he claims to have understood from before our invasion that "a group of angry Girl Scouts could have posed more of a threat to our national security than Iraq did," he repeatedly tries to pin responsibility for the Abu Ghraib outrages on the eight GI reservists whose photos blew the scandal sky high. He apparently can't imagine that the top levels of military and civilian leadership should bear responsibility. How can there be responsible leadership if we absolve the powerful authors and enablers of the crimes?

A Wayback machine post is about something I've dug into that is tangential to E.P.'s new book project. The topic seems all the more pertinent with the release of the report on how leadership of the American Psychological Association abetted government torture.
Posted by janinsanfran at 5:00 AM