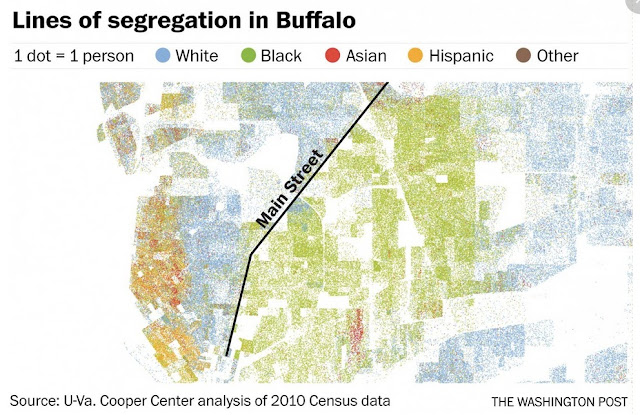 The Washington Post's Wonkblog has published an interesting set of demographic maps which highlight the human-made barriers which mark lines of racial demarcation. These turn out to be remarkably durable. When I left Buffalo in 1965, east of Main Street was mostly black, the west side very white. The area just south of the "Main Street" label on the map was just turning black. The street may be even more of a barrier now than then, since it has acquired trolley tracks since I left.

We did go across, because the Sears store (long closed) was on the other side as was the route to the airport, but there was with a sense of crossing over a barrier.

What's new since then is the concentration of Latinos and Asians (Vietnamese mostly I think) on the west side along the Niagara River. At first the Latinos were Puerto Ricans, then Central Americans in the '80s, now I expect more Mexicans. That area was Italian and Irish in my youth but I guess those folks moved north to the suburbs.

I grew up in the east-most corner of the blue (white) rectangle that is just northwest of the "M" on the map.