A Republican nightmare is here

Anglos, as non-Hispanic whites are known here, now number 14.9 million, and Latinos have edged them out with a population of 15 million.

[Roberto Suro of the University of Southern California]: Immigration brings in young adults. Young adults are at the peak of their fertility, and the white population has been aging. So baby boomers produced a lot of babies in the 1980s, bringing us the millennial generation, but since the 1990s, boomers have mostly been beyond childbearing. ... The white population is actually - in terms of natural increase in the United States, it's shrinking.

... Right now, because of the earlier waves of immigration and the earlier fertility, there are lots of Latino young people who are coming online every year - native-born citizens who are turning 18 and moving into the electorate. 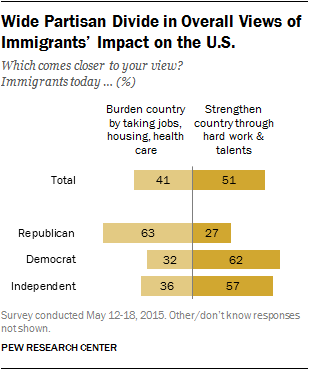 A recent Pew poll makes it abundantly clear that Republican horror about the newcomers is not limited to people who arrived here without legal papers. They just plain don't want any immigrants.

They aren't going to have their druthers. If they are lucky, very likely the people who care for them in frail old age will come from this immigrant stream. And thinking that there's a way to stop the demographic change is like Canute trying to hold back the tides. They need to get used to world that is and meet the neighbors!
Posted by janinsanfran at 5:00 AM