Get arrested; end up dead 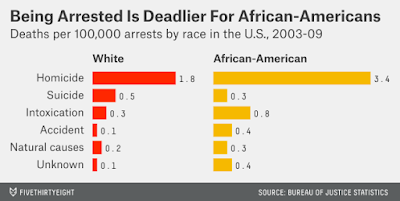 The Justice Department notes in both its report on deaths in jail and on arrest-related deaths that its numbers are likely to underestimate the true rate of deaths, because of underreporting, but that they have more confidence in the relative rate of different causes of deaths.

My emphasis. #Blacklivesmatter
Posted by janinsanfran at 10:29 AM