Enslavers built this country with the whip 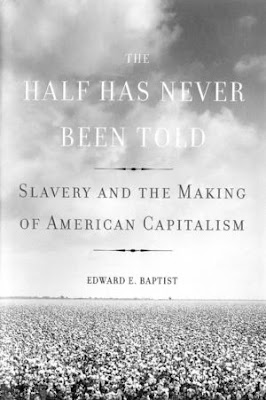 If you care about how white supremacy came to be the unhealed wound in this country's body and soul, I suggest two history books that provide a grounding through which to interpret that evil's current manifestations. The first was published four decades ago, Edmund Morgan's American Slavery, American Freedom. (The link is to my short discussion of it.) Morgan describes how adopting slavery made possible early colonial Virginia's tobacco economy and how maintaining slavery by violence warped the intellectual world of the U.S. founding generation. Last year, Cornell historian Edward E. Baptist's The Half Has Never Been Told: Slavery and the Making of American Capitalism extends analysis of slavery to the frontier states where cotton became king and U.S. capitalism accumulated its foundational wealth.

What Baptist has done is simple, if laborious and painful: he has studied many, many slave narratives and post-slavery interviews with the institution's survivors and discerned patterns of horror which render a story quite different from what we may have learned in school. Then he has woven this material into a powerful narrative of the pre-Civil War United States.

His central assertion, which I would say is unlikely to be refuted, is that southern planters in the then-southwest (Alabama, Mississippi, Texas and so on) invented a new system for exploiting bound human labor that yielded previously unimagined productivity. Enslaved African Americans literally created the wealth of the emerging United States, under the lash. Here's a longish, but I hope understandable, set of quotations that summarize Baptist's case:

The kind of slavery that [the slave Charles] Ball was encountering and that was emerging on the frontiers of the early nineteenth-century South was inherently new. For centuries, slavery in the New World had expanded by a process of extension: adding new slaves, clearing new fields ... By 1820, whites had already transported more than 200,000 enslaved people to the South's new [southern and western] frontiers in the years since 1790. ...

What made this forced migration truly different was that it led to continuous increases in productivity per person -- what economists call "efficiency." ... The first slavery [in Virginia and on the east coast] had not yielded continuous improvements in labor productivity. On the nineteenth-century cotton frontier, however, enslavers extracted more production from each enslaved person every year.

The source of this ever-rising productivity wasn't a machine like the ones that were crucial to the textile mills. In fact, you could say that the business end of the new cotton technology was a whip. ...

... The best known innovation in the history of cotton production, as every high-school history student knows, is the cotton gin. It allowed enslavers to clean as much cotton for market as they could grow and harvest. As far as most historians are concerned, the gin is where the study of innovation in the production of cotton ends ... But here is the question historians should have asked: Once enslavers had the cotton gin, how then did enslavers produce (or have produced, by other hands) as much as the gin could clean? ... [E]nslaver-generals took land from Indians [think Andrew Jackson and Sam Houston], enslaver politicians convinced Congress to let slavery expand [most prominently South Carolina's John C. Calhoun and such Presidents as Polk, Pierce and Buchanan], and enslaver-entrepreneurs created new ways to finance and transport and commodify "hands." And, given the finite number of captives in their control, entrepreneurs created a complex of labor control practices that enslaved people called "the pushing system."... Innovation in violence, in fact, was the foundation of the widely shared pushing system.

... "Their plan of getting quantities of cotton," recalled Henry Bibb of the people who drove him to labor on the Red River, "is to extort it by the lash." In the context of the pushing system, the whip was as important to making cotton grow as sunshine and rain. ...

[And the whip, squeezing productive creativity from the enslaved pickers, worked.] From 1805 ... to 1860 in Mississippi, the amount of cotton the typical "hand" harvested during a typical day increased three, four, six, or even more times over. In 1801, 28 pounds per day was the average from several South Carolina labor camps. ... by the 1840s, on a Mississippi labor camp, the hands averaged 341 pounds each on a good day ... To alienate one's hands and rewire them for someone else was torment. Enslaved people, however, discovered how to do it.

Southern planters could sell any amount of cotton to English mills; their riches rapidly increased. Northern financiers and budding industrialists got in on the bounty by buying up securitized shares of slave "hands" who worked on the plantations, financing yet further geographical spread of the system. This financial tie-in, in turn, meant that in the Panic of 1837, Northern bankers ended up owning the debt of some of the the biggest planters. Now it was their system.

From the perspective of the Southern planter class, the means by which their slave-enabled boom could be revived and made to last forever was through expansion to new lands. They sought (and obtained) Texas and yearned to seize the entire U.S. Southwest, Mexico, Cuba, and Central America for the slave production system.

African Americans had been saying for years that slavery's power built on the acquisition of new territory. On the frontier, enslavers could destroy the old standards of production, disrupt families, securitize the individuals extracted from them as commodities, sell the financial instruments thus created on financial markets around the world, and ride the resulting boom of excitement.

So why did resistance emerge in the North to extension of slavery? Baptist makes a solid case for the North's complicity in the profits of slave production, but is less clear on how countervailing forces emerged. Certainly most Northerners were not abolitionists until perhaps the middle of the Civil War and even then their abolitionism did not extend to sympathy with enslaved African Americans.

My understanding is that a critical fraction of Northerners came to resent being impeded by the "Slave Power" from developing the country in a different direction. The South's insistence on its "institution" stood in the way of "free labor," of "internal improvements" like railroads aided by the federal government, of a Homestead Act offering public land to settlers, and of the launching of land grant colleges. This vision had significant popular force behind it; Congress enacted much of it within a year of Confederate secession. Meanwhile, the South saw Lincoln's election by northerners with these ideas as a sign that they and their system had lost. Hence the wild throw of the dice that was the Confederacy and the Great Rebellion.

Baptist insists that we misunderstand how defining slavery was to the mid-nineteenth century United States.

It has been said that the Civil War was "unnecessary" because slavery was already destined to end, probably within a few decades after the 1860 election. Yet this is mere dogma. The evidence points in the opposite direction. Slavery yielded ever more efficient production, in contrast to the free labor that tried (and failed) to compete with it, and the free labor that succeeded it ... Forced labor that is slavery in everything but name remained tremendously important to the world economy will into the twenty-first century. [See this for example.] And the lessons the enslavers learned about ... forcing ordinary people to reveal their secrets so those secrets could be commodified, played out in unsteady echoes that we have called by many names (scientific management, the stretch-out, management studies) ...

I think Baptist would question, as we all must, whether the rebels of 1860 have even yet definitively lost their war to retain driven, powerless labor. This is what Harold Meyerson questions this month in How the American South Drives the Low-Wage Economy. The country is still fighting it out; at least some of the time, the contemporary "we" is a broader, more inclusive one than in 1860.
Posted by janinsanfran at 5:00 AM