A ghost unmasked and disempowered 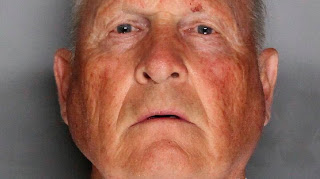 The arrest of the East Area rapist who preyed upon women in the Sacramento area and parts south in the 1970s and early '80s plunges me into regretful memories.

A woman who I can call a significant acquaintance was one of his victims. She might have become a friend, but the trauma impelled her to flee the state. The crime to some extent derailed her life plans. She's now deceased, I think.

For years, atrocious crimes connected to this mysterious figure continued, and the authorities couldn't seem to do anything. He haunted women's bad dreams.

And now law enforcement has seized him, based on DNA evidence, probably available because of a 2004 state mandate we voted into law. One of the backers of that initiative is quoted at the arrest press conference:

“To the victims, sleep better tonight, he isn’t coming through the window ...”

I know just enough to know that was my friend's enduring nightmare ...

Assuming this nasty old man is the right guy, I'm grateful they finally got him.

And since the jurisdiction is Sacramento, one of the rare counties where this still happens, the local prosecutor will probably seek the death penalty. More killing won't help. Just lock him away!
***
To feel something of the particular horror this criminal inspired, read Michelle McNamara at the New Yorker.
Posted by janinsanfran at 8:42 AM