The end stage of the Trump presidency? 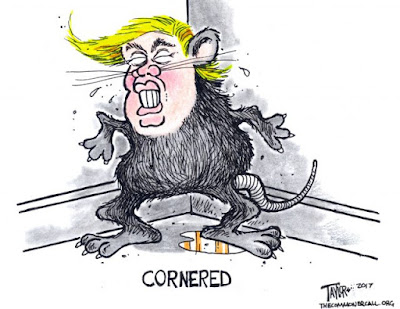 Since November 2016, responsible journalists have been hesitant to predict Donald Trump's downfall. After all, his election surprised most of us, though in retrospect we've become convinced the signs were there if we'd looked more dispassionately at the evidence. The New Yorker's Adam Davidson has crossed that line. He makes a bold prediction:

This is the week we know, with increasing certainty, that we are entering the last phase of the Trump Presidency.

He contends that when prosecutors raided the president's fixer, advocate Michael Cohen, they began a process that will crash the pillars of Trump's edifice.

The narrative that will become widely understood is that Donald Trump did not sit atop a global empire. He was not an intuitive genius and tough guy who created billions of dollars of wealth through fearlessness. He had a small, sad operation, mostly run by his two oldest children and Michael Cohen, a lousy lawyer who barely keeps up the pretenses of lawyering and who now faces an avalanche of charges, from taxicab-backed bank fraud to money laundering and campaign-finance violations.

Of course there's a long way to go. But Davidson believes the Trump presidency will not survive this exposure.

Of course Trump is raging and furious and terrified. Prosecutors are now looking at his core. Cohen was the key intermediary between the Trump family and its partners around the world; he was chief consigliere and dealmaker throughout its period of expansion into global partnerships with sketchy oligarchs. He wasn’t a slick politico who showed up for a few months. He knows everything, he recorded much of it, and now prosecutors will know it, too. It seems inevitable that much will be made public. We don’t know when.

We don’t know the precise path the next few months will take. There will be resistance and denial and counterattacks. But it seems likely that, when we look back on this week, we will see it as a turning point. We are now in the end stages of the Trump Presidency.

Since the first week of the Trump regime, I've opined we're up against three malignant strains that combined: 1) Donald Trump's wily authoritarian political instincts which have won him the fanatic allegiance of about 30 percent of us who are disappointed by the direction of their lives and country; 2) a Republican Party agenda which has no content except enabling looting of the country's considerable resources by wealthy elites, mostly in fossil fuels and financial manipulation; 3) Trump's economic model, the same model as that of oligarchs everywhere -- criminally using the state to extract individual, personal profit while contributing nothing to the life and well being of the community.

Davidson dares to say this triad is crumbling -- that unstable foundations will matter. We can't know how it will look, but we can sense that it cannot stand.

Citizens are not just spectators. Our agitation, our demands, our votes can help bring it down -- and then determine where we go from here. Resist and protect much.
Posted by janinsanfran at 7:44 AM