The job of Roman Catholic Archbishop of San Francisco was not easy back in the days when our city was becoming an epicenter of gay demands for full civil rights. While crossdressing men insisted on flouncing around in nuns' habits, the Church labeled officially homosexuality "intrinsically disordered." Then those homosexuals, including some wearing clerical collars, started dropping from a "gay plague" -- HIV/AIDS. A formerly well-mannered, respectable, and devout Catholic city was become an anarchic center of insurgent cultures.

As far as this detached non-Catholic lesbian could tell, Archbishop John R. Quinn (serving 1977-1995) navigated this toxic mix as gracefully as any Catholic bishop in the U.S. His pastoral response to AIDS included allowing the inclusive ministry of Most Holy Redeemer Parish in the Castro District and supporting Coming Home Hospice where so many gay men went to die.

Moreover, the Archbishop was well attuned to the explosive wars in Central America whose refugees and partisans were so much a part of the city. When members of the right wing military murdered Salvadoran Archbishop Óscar Romero in March 1980, Quinn called the assassinated prelate "a voice for the poor and the oppressed." He attended his funeral in San Salvador, a massive popular gathering which was broken up by military gunfire; Quinn reported vividly on huddling helpless within the terrified crowd that hid in the cathedral building. 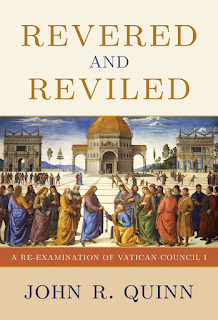 After his retirement (he lived on until 2017), Quinn turned to studying and writing Church history. His last work, Revered and Reviled: A Re-Examination of Vatican Council I, eventually became available through our public library, so I took a look.

I'm well read in European history, but I don't really have the necessary background knowledge to evaluate the accuracy of what Quinn offers here as historical narrative. In his telling, Vatican I, the mid-19th century Church council, is principally remembered for asserting the dogma of papal infallibility. He describes the drive to establish the idea as a consequence of the upheavals of the French Revolution in the context of Europe fragmenting into nation states which reduced the temporal power of the papacy. He brings forward the arguments of the minority of bishops who were opposed, pointing out how a monarchical/imperial papacy played poorly in those states which were democratizing. And he insists that subsequent propagandists of papal infallibility treat the resulting proclamation as a much broader assertion of papal power than the council actually authorized.

Ecclesiastical politics are as labyrinthine, sometimes ruthless, and often as fascinating as any other. Quinn lived long enough to see the current modest and pastoral pope in office -- the book seems almost a parting gift to today's incumbent. Quinn writes

My aim in writing this book has been to show that Vatican I is not an obstacle to the path of synodality so emphatically embraced by Pope Francis, nor does Vatican I proclaim a sovereign and absolute primacy outside of and above the bishops with a highly centralized governing of all church life. ... History plainly shows that the petrine mystery has taken different forms at different periods in history. ... the dogmatic definitions of Vatican Council I do not foreclose the collegial exercise of the primacy as more fully elaborated in Vatican Council II. ...

... And so, the Church of the twenty-first century, as it embraces and learns from Vatican I, could greatly profit from [Cardinal John Henry] Newman's penetrating insight:

"One cause of corruption in religion is the refusal to follow the source of doctrine as it moves on, and an obstinacy in the notions of the past."