Yet another test of what kind of country this is 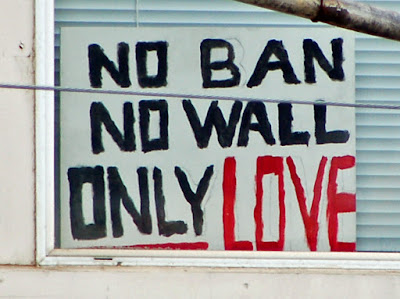 Today the Supreme Court will hear arguments about whether to uphold President Trump's Muslim Ban 3.0. Though somewhat more carefully drawn than previous versions, this executive order essentially blocks entry into the United States by most people from the Muslim-majority countries of Iran, Libya, Somalia, Syria and Yemen. The government says they are acting to keep out people who threaten our security. But Trump hasn't been shy about saying that he'd really like "a total and complete shutdown of Muslims entering the United States." Just before issuing this version of the ban, he tweeted that the restrictions "should be far larger, tougher and more specific - but stupidly that would not be politically correct!"

It remains to be seen whether this Court wants to make the country party to ugly religious bigotry by affirming Trump's ban.

Meanwhile Muslims in this country live within a climate of increasing threat. The Council on American-Islamic Relation's annual civil rights report documented

Of particular alarm is the fact that federal government agencies instigated 35 percent of all anti-Muslim bias incidents recorded in 2017. This represents an almost unprecedented level of government hostility toward a religious minority within the United States, and is counter to the American value of religious freedom.

What's it like for US Muslims these days? Too much of this: Globalization, an interconnected world where cultures and faiths and social structures meet and sometimes collide, is scary. It's also here, a fact. Freedom of (and freedom from) religion is one of the pillars that can made a global society work. No wall can roll back the global reality. In its better moments, this country has held up religious freedom as a core principle. Is that true today?
Posted by janinsanfran at 5:00 AM

It's a zombie apocalypse and worse than the atrocities you mentioned are happening because of it-- knifing and shooting strangers or using a van to mow shoppers down. Definitely zombies... and I am only partly kidding.