What happened to Stevie Juarez in Gilroy?

Over the weekend we attended the lovely wedding of two young friends in a family backyard in the southern Salinas Valley. On the way home, we stopped for gas in Gilroy -- and drove by this little community demonstration. 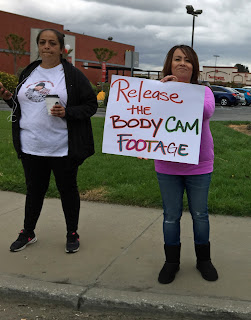 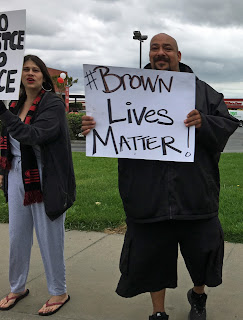 Stevie Juarez, 42, was well-known and well-liked in his East Gilroy neighborhood, a father, a son, and a football playing friend. On February 25, Gilroy cops, looking for a suspicious person, came upon Juarez lying on the ground. According to the Gilroy Dispatch:

Juarez died shortly after police responded to a 911 call on Feb. 25 reporting a suspicious person in a residential yard on the 7400 block of Chestnut Street.

When Juarez saw the responding officers, he fled on foot, over fences and onto rooftops of other homes, according to police. When officers caught up to him lying on the ground in front of a home, they tried to arrest him but Juarez allegedly struggled against them. Police said they used a variety of force techniques to subdue him, including a Taser and a carotid restraint. During the struggle, Juarez fell into medical distress and was transported to San Jose Regional Medical Center, where he was pronounced dead.

As of April 26, police are "still investigating" how Jaurez died in custody. Officials say officers acted "lawfully" and "appropriately" but family and friends naturally expect to be told more. The Gilroy cops have insinuated that Jaurez may have been involved with meth and pointed out that he had a jail record. Community members think this is a smokescreen thrown up after an unjustified killing.

“(The police) will do everything they can to make him this person who deserved to be executed by police,” said Laurie Valdez, whose husband was shot and killed by San Jose State University police in 2014. “You remember who he was. Make that the narrative.” 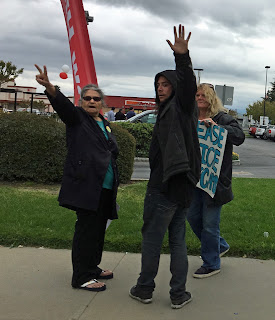 The local paper certainly worries that local history shows there is more to be investigated than authorities have let on.

For local activists and the survivors of Steven Juarez, a chief source of danger in some Gilroy neighborhoods is that entity that is supposed to keep them safe—the Gilroy Police Department.