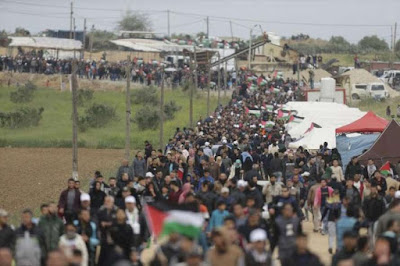 Considering that Israeli gunfire killed 15 Palestinian protesters and injured hundreds at the Gaza border last Friday, there's been mighty little media coverage of the ongoing mass protest. I can only guess that's how both Israel and the US powers-that-be like it.

The independent journal +972 explains the impetus for the Great Return March:

This year Palestinians will mark 70 years since the Nakba (in Arabic, the catastrophe) in 1948. During the 1948 war and its aftermath, Israel destroyed hundreds of Palestinian villages and more than 700,000 Palestinians were expelled or fled from their homes. Some 70 percent of the Gazan population are refugees, meaning they or their grandparents fled or were expelled from towns, villages, and cities inside the territory that become Israel in 1948.

According to Hasan al-Kurd, a leftist organizer in Gaza, the plan is to set up camps between 700-1000 meters from Israel’s border fence, outside the Israeli army’s unilaterally imposed buffer zone, where anyone who enters is liable to be shot. In the weeks leading up to Nakba Day [on May 15], there will be marches and bicycle races and other events every week, aiming to draw more attendees along the way. ...

“We want families. We want to live in peace — with the Israelis,”  al-Kurd said. “We’re against stone throwing or even burning tires. We will make sure the protest doesn’t escalate to violence — at least from our end.”

... Friday’s march in Gaza also coincided with the anniversary of Land Day, which itself commemorates how in 1976 Israeli security forces responded to a general strike and mass protest of Palestinian citizens of Israel by killing six and wounding some 100 others. ...

Inevitably, among the 30,000 or so reported to have marched, there were young men who threw stones. That's what young males who want to demonstrate they are becoming grown men do. Israeli troops, overwhelmingly well armed with modern weaponry and subject to no apparent restraints when it comes to Palestinian lives, took the bait. It is very unlikely the killing is over. 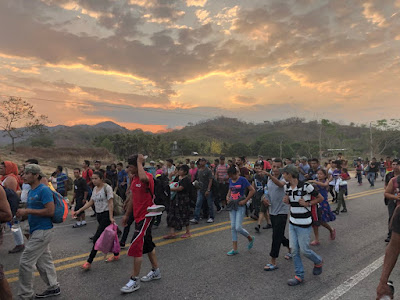 Meanwhile Adolfo Flores at Buzz Feed is accompanying a column of some 1000 Central Americans who are making their way across Mexico toward the US border.

Organized by a group of volunteers called Pueblos Sin Fronteras, or People Without Borders, the caravan is intended to help migrants safely reach the United States, bypassing not only authorities who would seek to deport them, but gangs and cartels who are known to assault vulnerable migrants.

Organizers like Rodrigo Abeja hope that the sheer size of the crowd will give immigration authorities and criminals pause before trying to stop them.

“If we all protect each other we'll get through this together,” Abeja yelled through a loudspeaker on the morning they left Tapachula, on Mexico's border with Guatemala, for the nearly monthlong trek.

When they get to the US, they hope American authorities will grant them asylum or, for some, be absent when they attempt to cross the border illegally. More likely is that it will set up an enormous challenge to the Trump administration's immigration policies and its ability to deal with an organized group of migrants numbering in the hundreds.

The Washington Post has published a good background piece about the refugee caravan.

El Salvador, Guatemala, and Honduras are among the most violent countries in the world. Drug traffickers and gangs, some like MS-13 in El Salvador which originated in the United States, extort, rape and murder vulnerable people. Honduras has been particularly murderous to its own citizens ever since a 2009 coup in which the army removed the elected president. The Obama administration, under the leadership of then-Secretary of State Hillary Clinton, refused to join international condemnations of that coup and approved the successor government which has detained many opponents.

President Trump has seized on the approach of the refugee column to inflame fears of arriving migrants among his always anxious base in a series of his trademark incoherent tweets about "big flows". The head of the Border Patrol Union seems to be champing at the bit to repel what he sees as an invasion.

Trump's bluster about the approaching refugees is all the more ominous since last month a federal court essentially allowed US cops to shoot people on the Mexican side of the border without penalty.
Posted by janinsanfran at 5:00 AM