It never gets easier Saturday was the second anniversary of the murder of Luis Gongoro Pat by the San Francisco Police Department.

Thirty seconds transpired between the moment that officers arrived on scene to the moment that they killed Luis Góngora Pat. A surveillance camera video obtained by KCBS caught the actions of the officers: “In the clip, officers are seen arriving in their patrol vehicles on Shotwell Street in the Mission District at about 10 a.m. Thursday morning without lights or sirens. They get out of their vehicles and advance on the homeless man who is outside of the frame.

... By all witness accounts, Luis was sitting on the ground minding his own business when officers brutally engaged him. He posed no threat to the officers, nor anyone else.

Friends and relatives, witnesses, and activists gathered at the death site to remember this married father of three grown children who had worked as a dishwasher in the city for over a decade. 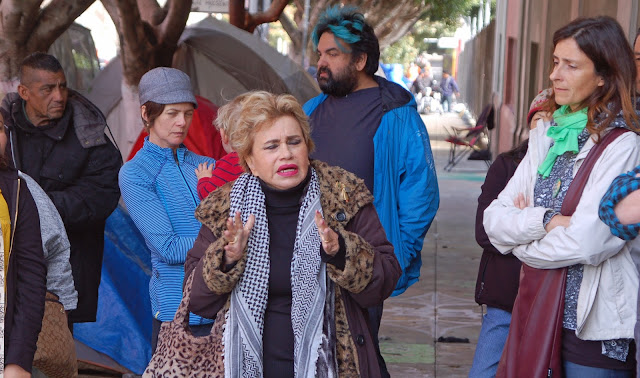 Maria Christina Gutierrez, who was a leader of the fast against SFPD killings in 2016 which led to the resignation of the last police chief, announced a daily vigil outside the offices of District Attorney George Gascon who has so far not charged the shooting officers. Here she is flanked by two women from the block who witnessed the killing and can't forget what happened in front of them. 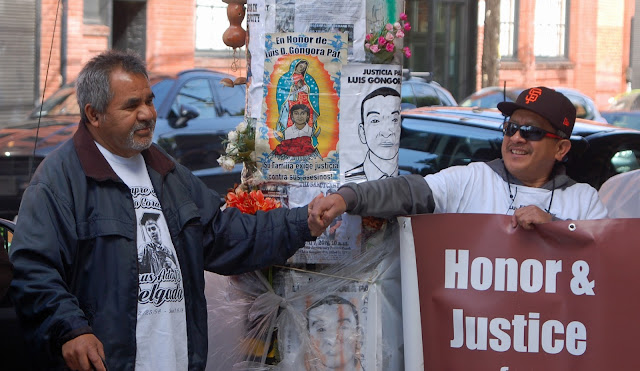 The father of Jesus Adolfo Delgado Duarte, killed by a hail of SFPD bullets on March 7, 2018, greeted Luis' cousin at the commemoration. For the families of the dead and their neighbors, it never gets easier.
***
And the US Supreme Court just made it even harder for civilians to get justice when police shoot them.

The court ruled Monday in favor of an Arizona police officer who shot a woman outside her home in Tucson in May 2010. Officer Andrew Kisela shot Amy Hughes four times after she emerged from her house holding a kitchen knife at her side and did not respond to commands to drop it.

Hughes sued Kisela claiming the officer used excessive force, but the Supreme Court ruled this week that Kisela was entitled to qualified immunity, a legal doctrine that says police are immune from excessive-force lawsuits as long as they don’t violate “clearly established” rights that a “reasonable person would have known,” The Post's Drew Hawkins reported.

Justice Sonia Sotomayor, joined by Justice Ruth Bader Ginsburg, said the ruling “sends an alarming signal to law enforcement officers and the public. It tells officers that they can shoot first and think later, and it tells the public that palpably unreasonable conduct will go unpunished.”

... The Washington Post's Wesley Lowery pointed out that the law seems to protect police more than those on the receiving end of a bullet. “This is what conversations about special prosecutors, body cameras, etc tend to miss: under our current laws, almost every single police shooting — no matter the circumstance — is legal. The police are legally allowed to kill you,” he tweeted.

A couple of California politicians are seeking to make it harder for cops to get away with blazing away, to set new standards that protect us all from wanton use of force by law enforcement.

SACRAMENTO — Two Democratic state legislators want to toughen the standard for when a police officer can shoot a suspect, a proposal prompted by the recent killing of an unarmed African American man in Sacramento.

Police would be allowed to use lethal force only when it’s necessary to prevent imminent death or injury and when there is no reasonable alternative, under a bill proposed Tuesday by Assembly members Shirley Weber, D-San Diego, and Kevin McCarty, D-Sacramento.

Officers can now use “reasonable force” when attempting to make an arrest, a standard set by state law and the courts. Deadly force is justified when an “objectively reasonable” officer would have reacted the same under the circumstances, according to a 1989 U.S. Supreme Court interpretation of the Fourth Amendment.

Stanford law Professor Robert Weisberg said California is free to impose a tougher standard than the Supreme Court set because the state would be giving more protection to civilians, not less. Weisberg said the bill would put more scrutiny on what an officer did to defuse a situation before it escalated to a shooting.

I'm not holding my breath. Police officers are schooled to fear civilians and learn to fire in response to their overblown perceptions of threat. The police unions are powerful in state government and work to prevent any infringement on officers' freedom to use lethal force. But there has to be a better way.
Posted by janinsanfran at 5:00 AM