Letter to some editors 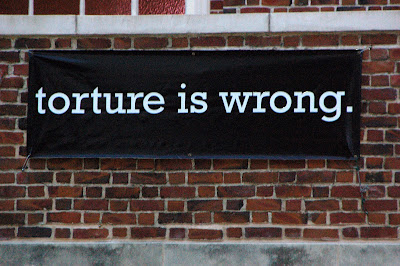 Why so mealy-mouthed? The nomination of Gina Haspel to be director of the Central Intelligence Agency has once again raised awareness of the torture practices the George W. Bush regime instigated, allowed, and covered for in the wars of the '00s. Nobody disputes that Haspel ran one of the "black sites" where the CIA literally taught itself how to torture, using the body of Abu Zubaydah. Nobody disputes that she dispatched the order to destroy video tapes of waterboarding, though the CIA contends she was just following orders (no shit, that's how this action is discussed.)

But over and over, the Washington Post writes around what all the world calls by its name: torture. Some samples: The debate is over. The torture apologists lost. The US tortured and has been rightly condemned around the world. Even that careful Senator Diane Feinstein calls what we were doing "torture."

Call it what is was. Get real with your "Democracy Dies in Darkness" stuff. Democracy dies when truth is obscured by phony polite obfuscations.

A concerned citizen
Posted by janinsanfran at 5:00 AM