Albert is no more 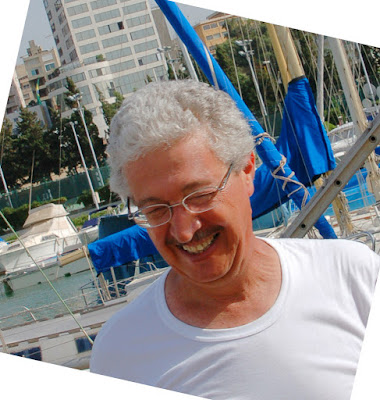 This past week I was shocked to learn that my friend Albert Naccache (pictured above enjoying his boat on the Mediterranean) had died in his home city of Beirut. As another friend wrote of him "... [he was] such a generous, gentle, sweet soul, and so smart."

Albert was a linguist and historian, a UCBerkeley Interdisciplinary PhD. determined to study his own Lebanese/Arabic roots, inventing his field if necessary. Some of his scholarly writings are accessible on the web in English, including Beirut Memorycide: Hear no Evil, See no Evil. In that article, he argued that Lebanon had missed a chance to develop a unifying understanding of its own history when, after the destruction left by the Civil War (1975-1990), it allowed reconstruction that bulldozed archeological treasures in the central city.


Mass psychosis waxes and wanes, and the sobering effect of the rubble might not last long. This is why it was important to take advantage of the rubble of Beirut’s Downtown to start a program of concerted archaeological research designed to uncover as much as possible about the history of this major Lebanese site. The proper archaeological study of Beirut would have been a first step towards the writing of the much sought-after “Unified Lebanese History Book.” Unfortunately, the needed “research framework or set of objectives and priorities for the archaeological work” ... was never elaborated. ...

... The aborted archaeological program has denied the Lebanese an opportunity to acquire a common ancestor, i.e. to have a common history. Because the loss of the archaeological wealth of Beirut has been the result of conscious and obstinate policies, and since it amounted to a loss of a shared, albeit “forgotten” memory, we are entitled to describe it as a memorycide. And we can but fear the consequence of this memorycide on the future of Lebanon.

Albert Naccache ¡Presente!
Posted by janinsanfran at 5:00 AM

Email ThisBlogThis!Share to TwitterShare to FacebookShare to Pinterest
Labels: gone but not forgotten, history, Lebanon