Grist's Eve Andrews has taken on the difficult question: why do some people believe what seem completely wacko conspiracy theories. I don't mean (and she doesn't either) just disagreements about climate policy; those can be quite sane -- it is not as if we have discovered all the answers to the threat. I mean the really crackpot stuff, like that Pizzagate (did you know that Hillary Clinton ran a child porn business out of a pizza parlor?) or even Donald Trump's crazy notion that millions of fraudulent votes were cast in the 2016 election.
Andrews interviewed academic researchers studying human mystification and came away with some observations.

You basically have two choices when it comes to a daunting problem like climate change, says Stephan Lewandowsky, a professor at the University of Bristol who studies the psychology and cognitive theory of conspiracy theories. “You can either accept the science and say, ‘we have to deal with this problem,’ and then look for the solutions least offensive to your worldview. Or you say, ‘the problem doesn’t exist!’ You deny the problem. The moment you do that, you have to figure out how to justify that to yourself.”

... Lewandowsky, the University of Bristol professor, says that there’s evidence of a way to “inoculate” against conspiracy theories, and that’s instilling a sense of control.

“For example, even just saying: ‘We’ve already started to tackle the problem, but we need to increase our efforts even more.’ That is a more empowering message than, ‘It’s so big, it’s horrendous, and we haven’t even started solving it.’ If I tell you that, that’s very demotivating! That’s a tough ask!

“I think if people know what to do about climate change, and they feel they can do this without hurting too much, chances are they’re less skeptical, less in denial of the problem.”

My emphasis. It's not clear to me how we could provide enough reassurance in many instances to do much good, though I find it interesting that the New York Times is evidently trying this approach through such interventions as How to Reduce your Carbon Footprint. 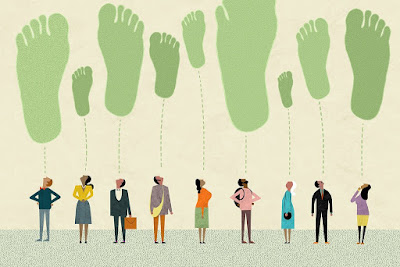 This is a very fear-filled society. All of us legitimately perceive our life chances as beyond our control, at least some of the time. Perhaps the best we can do to encourage the small choices that give us a sense that we're doing SOMETHING on climate and on other dimensions of life. Simple, but true.
Posted by janinsanfran at 5:00 AM

People believe what suits their preconceived agenda. Most of what we believe has to be based on faith as we don't personally get facts. Some believe Trump was running a child slave ring. Others believe somebody walked on water. Or how about that the Russian oligarchs got 20% of our uranium and it had nothing to do with over a million donated to the clinton foundation...

We are filled with information and much of it what someone wants to believe. The latest example is the Syrian gas attack. That's a fact. Who did it is supposition at least for now. What would Assad gain for doing it right as Trump is talking leaving? Supposedly Obama claimed he'd gotten Syria to let Russia take all their chemical weapons. Did that happen and if so, who has the weapons to use? who does gain from killing children? Who is so heartless as to want to kill them? Who will we trust to give us the answers?

We are so lost in all the suppositions, like is Trump about to be indicted, that we don't look at the facts and if we stick to our own news sources, we won't even hear any facts. It's all supposition.

I don't ever go into FB without some meme tearing into Trump for how he looks, what he might've done, hope he'll be impeached and very little about actual policies he's been implementing. I get and got nothing tearing into Clinton and that's because my friends there are pretty much all liberals or authors, and writers rarely express their political views to avoid losing readers. Not a bad piece of wisdom...