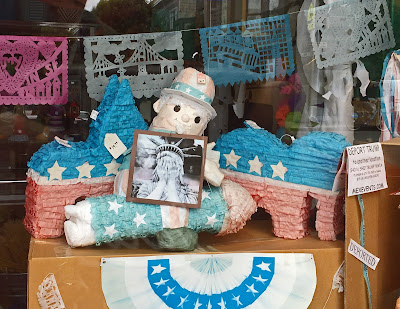 I spent an evening last week with friends -- older white lesbians, relatively prosperous, good and kind and liberal but not activist in the way we are in my household -- and was overwhelmed by the depths of discouragement they are feeling at this moment in the Trump/GOPer ascendancy. For myself, I know things are truly dire and this regime is daily working to impoverish, poison, or blow us all up, yet I am also delighted by the tenacity and creativity of resistance I see all around.

So here's a bit of a Washington Post oped that highlights one resistance accomplishment we too easily ignore:

Here’s a reality check: The resistance is not “failing” — it is gathering steam for a long, uncertain battle ahead.

Let’s start with the fact that seems most vexing to the resistance critics: the failure of Trump’s approval rating to fall below 40 percent, even as bad news mounts. To be clear, at 40 percent, Trump remains as unpopular as he was when he was the most unpopular first-year president ever — 20 points below Gerald Ford after he pardoned Richard Nixon.

True, Trump has not sunk further in this sub-sub-basement level of public support, but that misses the point: The success of the anti-Trump movement is in keeping him there, notwithstanding the low unemployment rate, stock market gains and billions in tax-cut stimulus surging through the economy. Only two other modern-era presidents enjoyed an unemployment rate below 4.3 percent in their terms and suffered an approval rating below 50 percent: Lyndon B. Johnson (during the Vietnam War) and Harry S. Truman (during Korea).

Trump’s 40 percent approval rating doesn’t reflect a failure of his opposition: It reflects success in preventing Trump’s ratings from soaring the way any other peace-time president’s would under such conditions.

Moreover, the anti-Trump movement has shown political progress where it matters most: the ballot box. In the past 150 days, Trump opponents have won a blow-out in Virginia, the first newly elected Democratic senator from Alabama since 1986 and a victory in a Pennsylvania House district Trump carried by nearly 20 points. If the anti-Trump movement is “failing,” that’s news to the GOP leaders sounding “blue wave” tsunami alerts.

My emphasis. We have a massive lot of work ahead, but we've been doing very good work, in all our various ways, all along. No quitting now!
Posted by janinsanfran at 5:00 AM

Email ThisBlogThis!Share to TwitterShare to FacebookShare to Pinterest
Labels: resistance

which poll are they citing as I read he's at 50% from Rasmussen. At any rate, polls right now are only intended to be emotional. They have zero meaning as anything could happen between now and November. The reason he is not more popular relates to the media more than individual resisters. The media, with only a few exceptions post anything negative about him and put off anything positive. His personality is a huge negative and they milk it for all they can. He's not a traditional politician. He's crude. He talks when he should listen, but his results aren't the same as his bluster. Maybe those who are most resistant to trump are those who pay too much attention to left wing news sources and avoid anywhere that would tell them the sky is not falling every day.

My hope is that the dems will find someone who can articulate reasonable positions on important issues that are good for the average person-- and mean it. So often we hear them talk good and then what they do does not help anybody but the rich-- both parties. I would like to hear how we get the programs we want and pay for them without our dollar devaluation to where people are fooled into thinking there's no inflation but all you have to do is look at what a home cost in 1995 to know what's happening. Because oil is cheaper (when it's not heating a house), people just don't realize what these huge debts are doing and will do. I want leaders who have responsible and genuinely beneficial social and economic programs. Currently, I don't see that happening and it looks like dems will rerun their old candidates in '20, which doesn't give me much hope for better answers from them.

RE Rasmussen: they have a very strong pro-Republican house effect. The 40 percent poll number derives from averages of all polls, including Rasmussen! :-)

I have read that about Rasmussen but also read nobody else is doing presidential polls right now. I personally could care less how someone polls this far before an election and really what matters now is getting responsible people in the House and Senate to get the Congress functioning. Lots of luck with that.