Is this how a conspiracy theory begins? 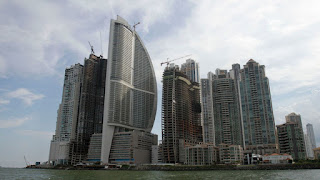 Amid the din of President Blowhard blustering about deadly but meaningless attacks on something/someone in Syria while squealing like the cornered rat he is as the law closes in on his lawyer/fixer, it would be easy to miss this development.

The third building from left above is the (former) Trump hotel in Panama City. On Monday we learned that Trump Organization -- the business from which the President refuses to disengage -- leaned on the government of Panama to try to get relief from a Panamanian judge's ruling that favored a former partner with whom the company is disputing ownership.

The request was extraordinary: The U.S. president’s company was asking the leader of a U.S. ally to intercede on its behalf, disregarding Panama’s separation of powers.

It is the first known instance of the Trump Organization asking directly for a foreign leader’s help with a business dispute since Trump was elected.

It's not as if the rule of law was so strongly established in Central America that this sort of gangster move might seem out of line. Nice little country you've got there ...

In case you've forgotten, or never noticed, when the hotel's majority investor, Orestes Fintiklis, moved to take over the failing enterprise in February charging the Trump company had mismanaged it, it was reported that Trump employees had barricaded themselves within and were shredding documents vigorously. Panamanian courts eventually turned the building over to Fintiklis. It's hard not to wonder what they were shredding.

Very possibly all these threads do not come together; very possibly the Panama eruption has nothing to do with the rest of the emerging criminality. Or maybe it's all of a big -- HUGE -- piece. I can't claim to know. But when there is some much bad behavior and general greedy grasping about, it's hard not to wonder.

Posted by janinsanfran at 6:33 AM

Very disillusioning time on so many levels. I want a white knight to come along. Oh way, that's how we always get into this :). Reading the papers this morning had me wanting to go bird watching and try to forget any of it. I think I'll post some birds on my rant lol