A Republic, if we can keep it

There were many and different responses to the revelatory catastrophe that was the 2016 election of Donald Trump. Some of the horrified marched, some cried, some organized, some thought of leaving the country. Thomas E. Ricks, recently retired from an honorable career as a mainstream journalist chronicling the U.S. military and its wars, thought he should investigate just what was in the minds of the the men of the founding generation.

Before that Tuesday night in November 2016, I had thought I understood my country.

The result is First Principles: What America's Founders Learned from the Greeks and Romans and How That Shaped Our Country. 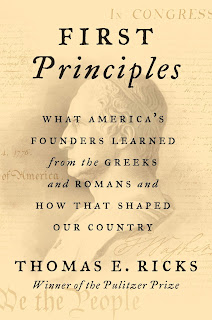 The book is a highly readable, slightly quirky, appreciation of the first four presidents. We find out what kind of schooling they received -- Washington had little formal instruction; while Adams was a Harvard man befitting his origins in New England; Jefferson a serious reader of philosophy at William and Mary College in Virginia; and Madison, a bit of an adventurer, who traveled out of Virginia to study politics in New Jersey at what became Princeton University.

And we learn what they cared about: in Washington's case, above all his reputation for "virtue," the formal character traits his generation admired in leaders of the pre-imperial ancient Roman Republic. Adams yearned to be thought a great man and despite many petty faults in fact was the first driver of the break with the English monarchy. Jefferson failed to focus his talents on the construction of government -- but had moments of genius such as accomplishing the tripling of the country's territory through the Louisiana Purchase which may not have been within his Constitutional mandate. Madison was a bridge figure -- less anchored in ancient Roman Republicanism, more open to a raucous, striving citizenry pushing west over the Appalachian Mountains into the rich center of the continent.

Ricks' descriptions are sharp and charming:

They grew into distinctly dissimilar men: Washington a stiff-necked soldier; Adams a brilliant, honest, self-absorbed crank; Jefferson a dreamer of liberty who living in hypocritical luxury off the sweat of captive humans; Madison already with one foot in the next generation, perhaps more an American than a Virginian and an unapologetic politician.

Though all these founders spoke against slavery, only Washington took any practical move against it, freeing as many of the enslaved people on his plantation as he could legally in his will. Adams never owned enslaved people. Jefferson and Madison did nothing to end the hegemony of the nation's original sin; forty years before the Civil War, they were aware that any real resolution might break the nation.

One of Ricks' previous books (another good read if interested) was The Generals: American Military Command from World War II to Today. In First Principles, the part that most enlarged my understanding of his subjects was a discussion of Washington's strategy and tactics for winning an improbable victory over the strongest imperial power of the day. Suffice to say, bold, romantic frontal charges at the British forces might have seemed to embody manly virtue, but attrition and care not to waste men or supplies won the war. It's an interesting discussion. There's no doubt that Ricks considers Washington an admirable general.

New York Times columnist Jamelle Bouie is also obsessed with understanding these men of the Early Republic. He makes points about our understanding of the founders that go well with Ricks' book.

...we lack of a sense of how foreign their world was as compared to ours. ...

... The United States of 1790 — the year of the first census — was a predominantly rural country with an extensive system of slave labor. Its largest city, New York, was home to 33,131 people. To a visitor from Paris (population: 524,186), the busiest metropolis of the young Republic would have looked like a provincial capital. ...

... The politics were vastly different too. It’s not just that there weren’t parties, but that there was no concept of the loyal opposition. ... For the most part, in the present, Americans of different perspectives and beliefs see each other as legitimate political actors. Or at least, they know they are supposed to view each other that way. But this is not a natural idea. It had to be developed. And in the meantime, political conflict between Americans could take on existential stakes.

... In fact, if there is anything we should take from the founders of American history, it’s that their world was not set in stone, and neither is ours.

The quotation used here for the headline, may or may not echo something Benjamin Franklin said exiting the Constitutional Convention.