Somebody wants San Franciscans to be very afraid ...

And some of us are very afraid, here in San Francisco. 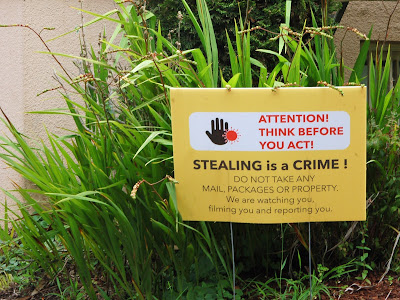 I was surprised to encounter a city block in tony St. Francis Woods where these signs appeared on a majority of lawns. (Yes, they have lawns out there.) Some folks are very worried about porch larceny and I'm not going to call them wrong.  Presumably porch thefts are their lived experience.

But some local media are touting a mess of BS about rising crime in the city, apparently in service of attacking our innovative elected District Attorney Chesa Boudin. The guy's mere existence is a boil on the local establishment's body politic -- what's the accomplished professional son of convicted Brinks robbers doing in a law enforcement role? They wanted somebody else, but the voters in their wisdom elected the former public defender. So Boudin has been threatened with two recall petitions -- one of which has already collapsed.

Atlantic reporter Emma Green interviewed our progressive D.A. at length. Here's some of what he had to say:

Boudin: My job is to make sure that San Francisco is safe and that people feel safe. Those aren’t always synonymous. There’s often a disconnect between what we see in terms of data and how people feel. That’s driven by individual experience, social media, and local news coverage as much as it’s driven by any policy that any district attorney could implement.

... It’s frustrating that the police officers’ association in San Francisco has consistently been a source of toxic misinformation and lies in the public discourse. We’ve seen the police union not just spend millions attacking me and other like-minded reformers—they also went after my predecessors. These tactics have nothing to do with me or my policies and everything to do with a retrograde, reactionary, racist police-union leadership determined to exploit tragedies, undermine criminal-justice reform, and ensure impunity for even those police officers who shoot and kill unarmed Black men.

People who don't live in the city might be confused by some aspects of the fight over Boudin and his policies.

• Around here, everyone with any pretensions to political relevance is a Democrat. So some of the recall boosters loudly proclaim they are Democrats -- and they are. Policy differences are fought out within the Democratic Party, not against Republicans. We have "moderate" Dems who look and act like conservatives in the view of the (small) majority of local liberal/lefty Dems. And there's no more fierce rivalry than between folks claiming the same honorable label. (We do have GOPers, a few. They are big money donors with no popular following but lots of political consultants on the gravy train.)

• The local police union is genuinely a "retrograde, reactionary, racist" power center. That may not represent all the cops, though it certainly is in line with the inclinations of many police officers. And the union leadership does a lot to keep any dissenters within the ranks from speaking out. Too many of these cops live somewhere else and venture into the city as if braving a war zone populated by savages. Working to wrest better behavior from the department is a long term, frustrating struggle which has exhausted many politicians and some police chiefs.

When you have been away even for a few days, you return to a pile of snail mail. On the way to the recycling this week, I pulled out this. Somebody wants me, a home-owning regular voter, to be very afraid. The named source is not a group, but an unfamiliar website, whose address I've cut off here. Some consultants are trying to scare me stupid. Is this from the cop union? Who knows? It seems pretty dodgy. 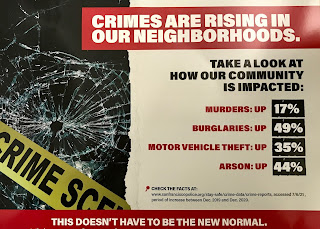 Bad police officers have nothing left but dirty politics.

Posted by janinsanfran at 10:30 AM