When we do what we have to do

I found myself thinking about my mother today. Her perfect pleasure, when I was small, was to load me and any available friends into the current Ford sedan; she'd drive us to Grand Island in the Niagara River to go swimming. We'd jump in and she'd watch us. Then we'd come out and she'd take a leisurely swim up river and emerge relaxed.

On the drive over and on the way back, we'd pass the local oil refinery and gas depot terminal. It looked a lot like this picture, only dirtier, and smelled of escaping fumes that burned from high pipes. 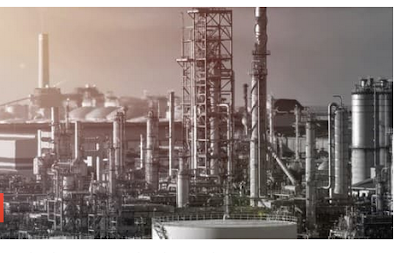 The sight entered my imagination as a sort of vision of Hell -- so smelly, so ugly. But I don't remember saying that to my mother.
That's not what my mother saw when we passed the refinery. She would explain that this -- and the Hooker Chemical factories down the road -- were what had won the War (World War II) and defeated the Nazis. There's was pride in the oil plant and the dirty, smoky industrial might which was her mid-20th century landscape.
• • •
This came to mind when I read Bill McKibben's account of a solar energy entrepreneur's attempt to erect an array of panels outside a Vermont town. Thomas Hand did everything he could to mollify concerned neighbors: he hired an "aesthetics consultant" and planned extensive tree planting to reduce the visibility of his project. The town gave him the necessary permits.
And then the state’s Public Utilities Commission turned down the project because it would detract from the neighbors' view of a nearby mountain in winter when the trees were bare. Property values might be hurt.
My mother would have been mystified. She came from a generation which understood that, confronted with existential crisis, you pull together as a community and do what must be done. And you could take pride in doing it.
McKibben describes what it might take to get back to that sort of understanding:

Building clean energy is the project of our era on earth. And at some level it really is an aesthetic issue. When we look at a solar panel or a wind turbine, we need to be able to see—and our leaders need to help us see, because that’s what leadership involves--that there’s something beautiful reflected back out of that silicon: people finally taking responsibility for the impact our lives have on the world and the people around us.

We are in an emergency, and an emergency calls for imagination, for literally seeing things in a new way. To hide that truth behind a screen of words is—well, offensive and shocking.

Just for fun, here's someone who did her bit in my mother's era and is still telling the story at age 100.

H/t friend Laura for this.
Posted by janinsanfran at 7:00 AM