Crawling out of the bog ... 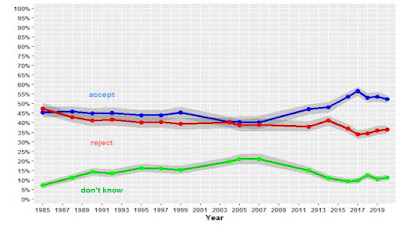 The National Center for Science Education reports that a majority of us seem to have firmly recognized that evolution is a fact.

“From 1985 to 2010, there was a statistical dead heat between acceptance and rejection of evolution,” commented lead researcher Jon D. Miller of the Institute for Social Research at the University of Michigan. “But acceptance then surged, becoming the majority position in 2016.”

2016 -- the year the know-nothings seized a national political party and imposed their bottom-feeding swamp critter. And the year many of us had to let go a deadly complacency.

It ain't over. The struggle continues. There are many more perils ahead. But I like the trend.

Posted by janinsanfran at 8:54 AM