Flushing their future down the drain

If these feelings persist -- and there's no reason to think they won't -- Texas and other abortion-outlawing states are in for a world of hurt. 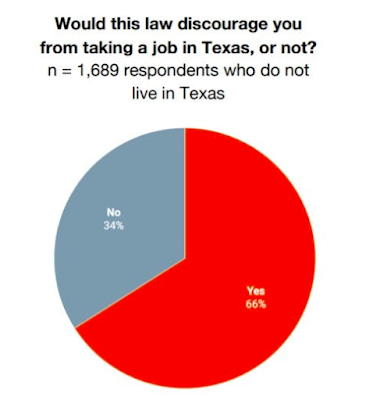 Texas' abortion ban could make it significantly more difficult for Apple and other major employers in Texas to attract top talent. A recent survey of 1,689 college-educated adults who do not live in Texas found that the state's new abortion ban would discourage them from taking a job in Texas.

A similar percentage (63%) said they "would not apply for a job in a state that passed a ban similar to [Texas'] SB 8." Half of respondents (49%) said "they would think about moving out of state if a law like SB 8 passed in their state."

Not every one of these respondents is going to stick to this intention if the right job comes along. But abhorrence of Texas' backwardness will exert a real drag on the nation's second most populous state. The future is not in fossil fuels and oil -- in fact, this sector is not dominant in Texas even today. The future is in innovations from highly educated people. Sunbelt anti-abortion states are making themselves unattractive with their restrictions. Good news for colder places trying to compete like Boston and Seattle.

Of course the actual victims of anti-abortion laws will be women with least privilege, with the least ability to evade the restrictions. But Texas is winning these folks some very self-interested allies.

Posted by janinsanfran at 10:40 AM