Amid the cacophony created by California's recall election and the threat from the Delta bug, this year's legislative session has spit out, and the governor signed, bills meant to increase creation of new housing. Housing policy is almost impenetrably complicated and the actual impact of various tweaks may or may not be as anticipated or accomplish intended goals. But nobody can argue we don't have a problem and that government ought not be trying to do something.

We need to cozy up in the larger cities near jobs and public transportation. That means filling in vacant lots with housing, making more efficient use of residential land and building higher rather than sideways into far-off suburbia, where long commutes play havoc with family life and emit greenhouse gases that accelerate climate change.

But mainly, we’ve got to do something about the economics of supply and demand that are turning the California dream into a nightmare for millions. There’s a dearth of supply and unquenchable demand. We need to add 1.8 million to 2.5 million new homes by 2025, and we’re crawling along at maybe 100,000 per year.

... “Local government has less control under these bills,” says Sacramento Mayor Darrell Steinberg, a former leader of the state Senate. As a legislator, Steinberg pushed through some of the earliest legislation that attempted to incentivize more urban housing near public transportation.

“I’ve been on both sides. My view has not changed. Local control is an important value, but it’s not absolute. It’s not more important than the desperate need in this state to produce more housing.”

Cautiously, I'm with Skelton and Steinberg. My generation must not foreclose the possibility of younger people thriving in the place we love. We have to find a way to get more housing built, particularly at the affordable end of the spectrum. If down zoning helps, so be it.

That said, I have lived in a neighborhood, San Francisco's Mission, which has experienced itself as undergoing gentrification for as long as I've been here -- nearly 50 years! When I came, I was part of that, intruding on a place that had been working class Irish-American on its way to becoming working class Latinx. The "white hippies" landed here because it was cheap -- and we felt we belonged because we loved the local cultural stew alongside our neighbors. And some of us are still here.

But when a certain kind of housing policy advocate screams for more urban density, they seem routinely oblivious to the fact that somehow the new housing almost always gets built to the detriment of existing housing, of existing communities, usually poor and of color. The vision of more density everywhere is nice -- but controversial development will always be crammed into communities which have the least power to exert local control. Anyone who doubts that should look at the Fillmore-Western Addition San Francisco neighborhoods where a thriving urban Black community was bulldozed to be replaced by antiseptic highrises and some public housing. Of course we distrust.

Jerusalem Demas at Vox is a policy journalist who aligns with advocates for greater density. But she takes seriously what gentrification does to neighborhoods.

None of this is to undermine the very real cultural conflict that gentrification brings. Even if you’re able to stay in your neighborhood and your home, watching store after store pop up that doesn’t serve your community or isn’t available to you at your income level can be deeply alienating. It’s no wonder that people who have faced centuries of disinvestment grow angry as public and private money flows into their neighborhoods only after high-income, college-educated people choose to move there. Even if those people are not wholly responsible for the inequality, the blatant injustice is hard to ignore.

Taken all together, it becomes clear why we focus on gentrification while the unseen culprits (segregated enclaves) are able to avoid controversy: Gentrification is the most visual manifestation of inequality in urban life.

Or, it's the racism and economic exploitation, stupid! 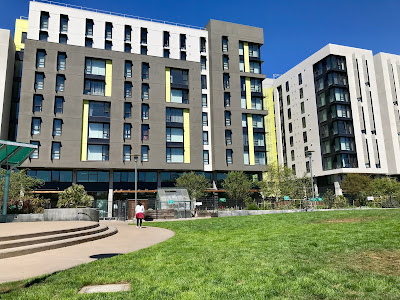 Meanwhile, let's celebrate when new, well-designed, dense housing is available to some who need it. Walking during the pandemic, I watched with curiosity as the new structure in the former light-industrial neighborhood on Folsom Street seemed to fly up. Casa Adelante opened to residents in July. Erected after a ten year development and funding process, the new Mission Economic Development Agency (MEDA) building provides 127 "permanently affordable" units for low income residents.

The obstacle strewn process that hamstrings creating buildings like this one is what needs to be blown up -- along with some local restrictive density limits that have advantaged single family homeowners.

Posted by janinsanfran at 9:41 AM