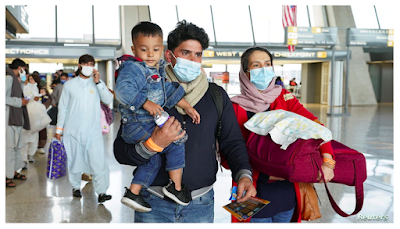 Most of us are not likely to encounter refugees from the shitshow the U.S. has stirred and left behind in Afghanistan. (San Francisco Bay Area residents may be slightly more likely than most to have the opportunity as there is a good-sized Afghan community in the South Bay.)

Sociologist Dr. Iman Ahmad-Sediqe has passed along a useful Twitter list of "micro aggressions" to avoid if you did meet newly arrived Afghans. It struck me that many of these suggestions would be appropriate to meeting anyone newly plopped in these disunited states regardless of their country of origin. The following are lightly edited for length.

A list of micro aggressions to avoid with newly arrived Afghans:

This is a delicate period of transition. As an Afghan American, & an academic who has studied the community, I urge you to avoid certain behaviors. These ... can be hurtful for our new neighbors.

1. Don't call them Afghanis. Afghani is the word for the currency in Afghanistan and is utilized as a slur by other communities against Afghans. The appropriate word for someone from Afghanistan is Afghan.

2. Don't ask an Afghan what their tribal background is. This is not showing interest in who they are, but rather displaying your interest in labeling them into a box.

3. Don't assume because they are refugees, that they are uneducated. Many are professionals whose degrees & accomplishments aren’t accepted in the American system, so they have to take up working class jobs in order to care for their families.

4. Just because they may speak with an accent, doesn’t mean they think with one— Some assume an accent means someone is intellectually inferior. On the contrary, these individuals are bilingual & can balance multiple languages. They simply communicate in a way you’re not used to.

5. Don’t ask them what their political views are on America. You don’t ask a neighbor who they’re voting for, it’s same courtesy. They’ve been through a more complex experience than you may be aware of and are focused on feeling a semblance of safety, not on trivial political ?s

6. Don’t ask if they’re Shia or Sunni. Assuming that the media portrayal of sectarian friction applies to them is false. Their personal experiences are much richer than that. Give them space to practice their religion however they feel comfortable. They just want to feel welcome

7. Don’t bring nationalism and racism into a discussion with them. They’re mourning the loss of their homes and social networks. They don’t want to hear about your political opinions. They’re not responsible for the refugee crisis.

8. Don’t assume one individual is representative of every Afghan & every Afghan’s experience. This is an unfair burden to carry, & would be akin to a foreigner meeting one American & assuming he represents the entire country.

9. Don’t expect them to immediately feel comfortable with you or trust you. The emotional toll they are experiencing is intense. Building relationships for them will take time....

12. Do NOT expect a personal thanks from them. Their homes were destroyed, their lives at risk, and their families torn apart. Providing humanitarian aid should not be done expecting a thanks. They don’t owe you anything.

13. Do NOT preach your religious perspectives to them (regardless of what religion you’re from). This is awkward & uncomfortable, even if you are from the same religion. If it’s a social taboo to discuss religion with guests, the same applies here…

13. (Continued)…They are preoccupied with feelings of loss, PTSD, & worries of resettlement. Give them the grace of space to not get into heavy topics or feel imposed upon.

15. Don’t feel a need to give them a personal crash course on America. Let them ask you questions. If there’s something you notice that would be helpful for them to know, approach someone who they are comfortable with to discuss it with them one on one in private…

15. (Continued)… Do not humiliate an adult by correcting their behaviors publicly. There are cultural norms they’re learning.

What other tips might readers have to offer for welcoming newcomers ... any newcomers?

Afghan refugees do need community support. Jewish Community and Family Services - East Bay has been on the job resettling displaced Afghans for years and offers a good window on their needs.

Posted by janinsanfran at 10:11 AM