So much comes back to John Maynard Keynes

You know how they say everyone finds God in a foxhole? Well, by the same token, during a serious economic crisis, everyone finds Keynes. New Republic editor Michael Tomasky

The world discovered that John Maynard Keynes was right when he declared during World War II that “anything we can actually do, we can afford.” Economic historian Adam Tooze 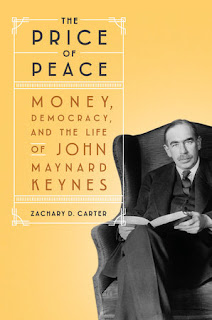 Carter's subject worked at the highest levels of British government on the problems (there were plenty!) of finance during both The Great War (1914-1918) and the Second World War (1939-1945). In between, he speculated successfully in stocks, criticized his country's political leaders, and articulated a vision of economics while teaching a coterie of brilliant students at Cambridge. After World War II, he helped create both the British welfare state launched by the Labour government of 1945-1951 and, reluctantly, the Bretton Woods international economic order which cemented the United States as the world's dominant power.

But Carter wants us to understand that my skeletal sketch here is inevitably inadequate.

Today Keynes is remembered as an economist because it was through the field of economics that his ideas exercised their greatest influence. College students are taught that he urged governments to accept budget deficits in a recession and spend money when the private sector cannot. But his economic agenda was aways deployed in service of a broader, more ambitious social project. Keynes was a philosopher of war and peace, the last of the Enlightenment intellectuals who pursued political theory, economics, and ethics as a unified design. He was a man whose chief project was not taxation or government spending but the survival of what he called "civilization" ...

Keynes was a tangle of paradoxes: a bureaucrat who married a dancer; a gay man whose greatest love was a woman; a loyal servant of the British Empire who railed against imperialism; a pacifist who helped finance two world wars; an internationalist who assembled the intellectual architecture of the modern nation state; an economist who challenged the foundations of economics.

It's interesting to understand that this polymath mostly loathed the United States whose pragmatic, coalitional, bourgeois politics he understood poorly. Yet his influence has perhaps been greatest here and only through U.S. global predominance worked its back to countries he considered far more civilized.

... the history of Keynesianism is an intellectual history of American power, both its promise and its abuse ...

Keynes had a way of asserting home truths that took the economic profession aback. For example, in his most technical work, the General Theory he allows:

Enterprise only pretends itself to be mainly actuated by the statements in its own prospectus. ... Only a little more than an expedition to the South Pole, is it based on an exact calculation of benefits to come. Thus if the animal spirits are dimmed and the spontaneous optimism falters, leaving us to depend on nothing but a mathematical expectation, enterprise will fade and die; -- though fears of loss may have a basis no more reasonable than hope of profit had before.

No, he was not one for believing in the rationality of markets.

Carter highlights the central Keynesian insight from the Depression which has come down to us:

To get people back to work, they had to be able to buy things and thus to incentivize businesses to make salable goods would lead to creating jobs. In a world where such a thought was a novelty, this was genius. In our pandemic world, we've seen the cycle play out as financial stimulus that permits recovery from an induced artificial recession.

Keynes is both applauded and mocked for observing in 1930 that the productive power of modern capitalism should lead to a society in which people only needed to work for 15 hours a week for wages. They would be free to use the rest of their lives for self-education and creativity. Of course, he was wrong; late capitalism siphons more and more of working people's product to the owners, never sharing the goodies (the profits) with most workers. He more or less knew what would get in the way of his vision; we have been convinced we have pseudo-needs that keep us on the treadmill.

Keynes distinguished between human needs essential to survival and semi-needs whose 'satisfaction lifts us above, makes us feel superior to, our fellows. Needs of the second class, those which satisfy the desire for superiority, may indeed be insatiable.'

A lifetime lived within late capitalism makes that statement hard to assess. Do we really need all we're accustomed to want? Hmm...

Keynesian economics were formulated as a defense against fascism, so it was appropriate that Keynes [and his intellectual allies] would join the war effort against Nazi Germany and Fascist Italy. But Keynesianism was also developed to prevent war, and it remains one of the great tragic ironies of intellectual history that the very catastrophe Keynes had attempted to avert for nearly two decades would be the event that finally demonstrated the viability of his economic ideas on the world stage.

Keynes makes a fascinating subject for biography. But chewing over the life of this strange and wonderful man is not all Carter has done in this volume. As I often do, I read this book by ear. So when Carter reported on Keynes' death in 1946, I was shocked to realize I still had six more hours of listening ahead.

Carter follows the bumpy trajectory of Keynes' reputation and intellectual influence among economists and policy makers in the Western world up to the present. This was interesting -- I never previously had known why the right are such enthusiasts for Keynes' Austrian critic Friedrich Hayek nor all the ins-and-outs of Democratic economic eminence John Kenneth Galbraith's drive for political power. All fascinating, some relevant to today -- and more than I want to attempt to get in to here.

The Price of Peace demands a major investment of attention and cogitation. Highly recommended.