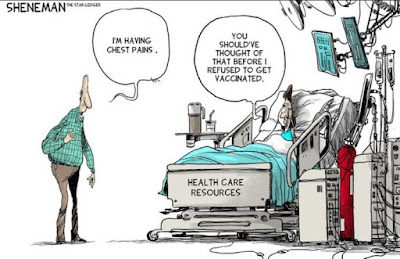 A thread of Anger. Any other ICU professionals tired of being asked about resilience? It feels analogous to asking how well the armor is doing at stopping bullets, instead of asking how can we help avoid the bullets in the first place

Last March I walked into an ICU that I (and everybody else) knew was about to be overrun by COVID. It's said that bravery is not the absence of fear, but rather duty in the face of fear. We felt fear, but also an unmistakable sense of purpose, duty, and solidarity.

Since then I have walked into 3 MORE similar surges of COVID, now working through the fourth. The first few we saw that sense of purpose, mutual support, and duty...to each other AND to our patients. That feeling is probably still there but its buried...

Purpose has given way to seething anger, boiling under the surface but undoubtedly there, even if we don't say it out loud. It's anger because this did not have to happen. Contrary to what has been widely assumed, NOT all the sick are unvaccinated. Clearly it's the majority...but in my ICU there are also those who are vaccinated, but also (for one reason or another) immuno-suppressed, either for congenital reasons or because of organ transplants.

Imagine coming close to death, being rescued because someone dies and donates their organs, then dying of COVID in spite of being vaccinated because someone with a "My body, My choice" sign (if there was ever a more inappropriate use of an appropriate phrase, I haven't seen it) decided to breath near you.

THIS is what your neighborhood ICU docs/RNs/RTs are seeing. We're seeing unnecessary suffering, often inflicted by the worst form self-centered ignorance. Professionalism means you do your best, even when not at your best, but devotion to duty erodes like steel exposed to water. Slowly but progressively, and it will catch up to us. END.

Professionalism has been very important to holding this country together over the last five years. The professional procedural pride of many people in the legal arena -- of some bureaucrats -- of election administers -- has stood between us and chaos.

Now the docs/the nurses/the techs are on the line, doing their jobs amidst criminal selfishness.

I have no qualms whatever about wanting policies to coerce people to get vaccinated for the good of the community -- and I'm probably one of the more considerate among us.

Email ThisBlogThis!Share to TwitterShare to FacebookShare to Pinterest
Labels: pandemic