A brave and generous doctor 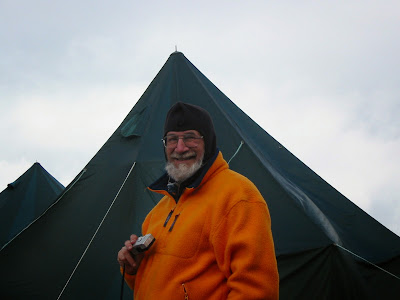 We met Dr. Richard Gross, who succumbed to a cancerous tumor on Friday, during our hike up Mt. Kilimanjaro in 2002. When you sign up for an organized trip, you never quite know what -- or rather who -- you'll find yourself thrown in with. (We've had terrific luck actually, but you never know.) We lucked out in finding Dick and Robin in our party.

Climbing Kili was not easy. We were unlucky in the weather. We had rain and snow most of the way to the 19,300 foot high summit. Three of our original party of 12 were forced down along the way by harsh conditions and altitude sickness. Aging tourists can only attempt this adventure because their gear is hauled along by an army of Tanzanian porters, only some of whom can afford proper shoes and clothing. For the porters, this is a good job!

After a long day, our third day in sleet, snow and rain, we camped at about 13,000 feet. Overnight, it became obvious that some of us would have to give up the climb. Late that night, an incoherent porter stumbled off the mountain into our cook tent. It rapidly became clear that he had been abandoned when he couldn't carry his load by the tour group that had hired him. Dick identified his symptoms as severe pulmonary edema. He guessed the man very well might die overnight. So Dick insisted that our guides break out the oxygen they hoarded for an emergency among the tourists. After a night with some breathing help, the porter joined those of our party who were going down and everyone turned out just fine.

Dick, a self-effacing, amiable man, had risen to the special moment when he needed to break out his expert authority and use it. His insistence on treating the porter broke the frame within which a tourist trip to a high mountain usually remains locked: the guides as knowing, parental figures; the tourists as dependent, infantilized semi-children in an unfamiliar environment.

I never discussed this with Dick, but I am sure he wouldn't have thought he did anything special. And he certainly did something most of us would have wished to have done in his place. But knowing when to breach conventional roles requires habits of right living that we might all seek to emulate: generosity, courage, compassion.

We stayed in touch with Dick and Robin and so have followed his two year struggle with his disease through Robin's updates. At one point she wrote:

He still has such a cheerful outlook and a sense of humor despite recognizing his weaknesses. He is filled with gratitude of having lived a full life and being blessed with so many friends and family who are there for him. He just constantly amazes me!

Dick Gross amazed and delighted so many people. He will be profoundly missed. 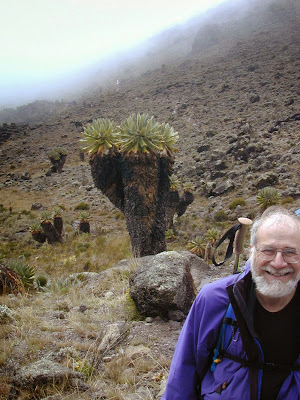 Wow, I am impressed that you did that climb. Terry went up there when he was in his 30's. I stayed home with the kids. Later I had a chance to go climb Kilimanjaro with a friend on an expedition to celebrate her 50th birthday but turned the invitation down, because I had to work (or thought I had to work).Now I'm too old to do it. C'est la vie, I guess.
Lucky that you had a physician along in those circumstances. He sounds like a heroic person.