A rant against the California "Top-Two" primary 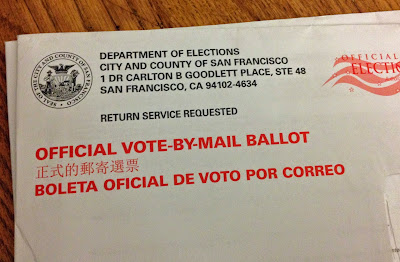 My ballot for California's June primary election came today. There's only one race on it that matters. I'll delve into that one in the next few days. But first, I need a good rant about the nonsensical "Top-Two" primary system under which we vote in June.

We have the "Top-Two" monstrosity because until 2010, California required a two thirds majority of the legislature to pass a budget. (We then passed Prop. 25, penalizing legislators for late budgets, but dropping the supermajority requirement.) For a decade and more, California had had a majority of Democrats in both houses in Sacramento, but not enough to pass a budget over unanimous Republican opposition. If you've been watching Washington, you know what that looks like. So every year a Republican or two had to be bought off for the final couple of necessary votes. And inventive Democratic leaders pulled this off every year; I remember Assembly Speaker and then San Francisco mayor Willie Brown made one of his tame Republican former assemblymen something like dog catcher in the city.

In 2010 the Republican who had to be bought off was State Senator Abel Maldonado. His price for allowing passage of a budget was to put the "Top-Two" system on the ballot in June 2010, a low turnout midterm primary. We'd had an open primary system once before, but this was overturned by the courts in 2000. In 2004 in a presidential (high turnout) election, an initiative mostly identical to the 2010 measure failed with only 46 percent of the vote. But Senator Maldonado got his pound of flesh and the primary electorate passed the "Top-Two" system.

What's this mean? It means that all candidates for state and Congressional office first run in a primary election -- a low turnout affair when hardly anyone is paying attention. Then the top two vote getters, regardless of party affiliation, go on to slug it out in the November election.

Let's think about the various ways this is stupid and usually anti-democratic:Last month, the Public Policy Institute of California issued a report on system.

In the first test of California’s top-two primary in 2012, the new system failed to produce the increase in voter turnout that many had hoped for. But it did appear to encourage participation of independent voters. ...

The shift to the top two has added new urgency to the question of who votes in the primary and who doesn’t. The PPIC report finds that California’s primary electorate is older, less likely to be Latino or Asian American, and typically more Republican than the electorate in the general election. The partisan differences mattered little in the old system because every party that ran at least one candidate in the primary would be assured a place on the fall ballot.

Now, primary voters can close off the possibility of a contest between parties in the fall. ...

I fail to see how democracy is served by allowing an unrepresentative slice of the electorate to limit who can compete in the actual election.

And I can't see the point of enthusing over a few additional "independent" voters. Yes, lots of people choose not to state a political party. Sometimes this may involve real policy choices; more often it seems to mean "not my game." But these people are almost all consistent partisans in the actual vote. Political scientists long ago concluded that true, ideological "independents" are vanishingly rare. They are repeating that wisdom as we approach another low turnout midterm election. Pundits addicted to "on the one hand; on the other hand" analysis love "independents;" they give writers someone to write about. But on the street, it is darn hard to find one. We shouldn't be shaping our electoral system around a fictitious character.
Posted by janinsanfran at 7:52 AM