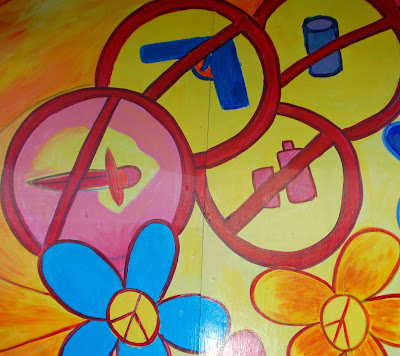 I know -- our busted political system has just managed to get the country onto a (somewhat) improved health insurance plan, at the cost of years of screaming, misinformation and downright bullshit. However, eventually, if we want all of us to have access to cost-effective medical care, we're going to have to make the transition to managed care, salaried doctors paid to keep us healthy rather than by the procedure, all with a single payer, most likely the government. Reality is demonstrating this every day.

Sergeant Shane Savage struggled with pain. He was blown to bits in Afghanistan and painstakingly and well reconstructed by Veterans Administration docs. But however marvelous his apparent bodily recovery, he still hurt -- he still suffered the nervous disorientation of PTSD and he experienced what doctors call "chronic pain."

Wars can stimulate medical advances: so many patients, so comparatively great resources to try new approaches on damaged human bodies and minds. The US wars of the 00s have taught the Department of Veterans Affairs that filling broken soldiers with opoid pain pills is not the route to relieving suffering. Better to invest in rehabilitation -- physical therapy, behavior modification, counseling, acupuncture and yoga.

Five years ago, approximately 80 percent of the injured soldiers treated at Walter Reed Army Medical Center in Washington were prescribed opioids. That figure has since plummeted to 10 percent, and many patients are benefiting from the change, said Dr. Christopher Spevak, a pain specialist there.

“As we decrease the amount of opioids, their healing and recovery has gotten much quicker,” Dr. Spevak said. The implications go far beyond the military because most patients at Walter Reed in recent years have not been suffering from serious battlefield injuries but from problems many civilians face, like back injuries.

Apparently the word is spreading; a friend who had drifted away in the opoid haze has had meds drastically reduced and may be rejoining the rest of us on the same planet.

So why did docs think for so long that the powerful pain drugs were the only way to go to treat intractable, chronic pain? Well, rehab is expensive -- and not only that, it's hard in a private insurance market for insurers to capture the pay off: a healthier, less expensive insurance customer.

In some cases, insurers will pay for such treatments, but the practice is not widespread because there are few standards to judge their value, said Dr. Jeffrey Livovich, a medical director at Aetna. Dr. Edward Covington, the director of the Neurological Center for Pain at the Cleveland Clinic, said he believed that companies like Aetna had another incentive not to pay: Programs like his are initially more expensive than opioids, and insurers are loath to invest in patients when they do not know if they will be their customers next year.

“Their view is, why should they benefit another insurer?” Dr. Covington said.

The Veterans Administration is a single payer system for persons who become the unlucky detritus of our wars -- it can afford to take the long view and prioritize patient well-being over quick results. This turns out to lead to better health outcomes all round.

My civilian pain-hazed friend is apparently being weaned off the drugs. The docs are getting the message. But our profit-oriented health insurance system incentivizes providers in the direction of expensive treatments and sometimes inferior outcomes. Except, that is, outcomes for the compensation of insurance company executives and their share holders. One way or another, these insurance parasites must be brought to heel.
Posted by janinsanfran at 5:00 AM