Betting (and profiting) on climate change 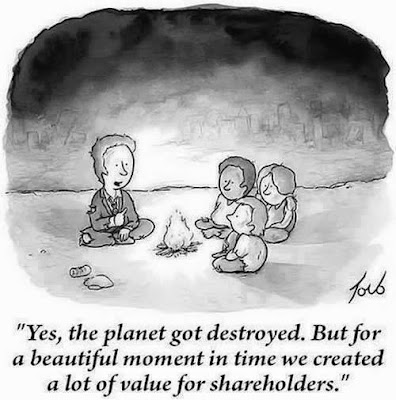 Under capitalism, society is organized so that the only reliable incentive to innovation is for someone to make money. We don't seem likely to do away with capitalism anytime soon, so combatting global warming, if we do it, will have to happen in a context of private profit. David Atkins at Political Animal thinks we have an unlikely ally:

... rising sea levels and more frequent natural disasters will either make many areas uninsurable, or insurance companies will go bankrupt trying to insure them (and the same goes for insurance backed by the federal government.) Insurance companies have an existential need to get ahead of the curve on the climate question.

And he points to a Christian Science Monitor report:

A major insurance company is accusing dozens of localities in Illinois of failing to prepare for severe rains and flooding in lawsuits that are the first in what could be a wave of litigation over who should be liable for the possible costs of climate change. ...

"It's a long shot for the insurance companies, but it's not completely implausible, and if you have enough cases like this going forward it might build some helpful precedent," said Robert Verchick, who served on the Obama administration's Climate Change Adaptation Task Force.

He said insurance companies are vocal about the rising costs of global warming and want to push cities to invest in prevention as a way to avoid future lawsuits.

We might get some meaningful mitigation efforts out of this economic pressure, I suppose. How come I remain convinced that the people who've profited from our addiction to fossil fuels will pay less of the costs than the ordinary shlubs who find themselves blown away or flooded out?
***
When Robert Shiller was awarded the Nobel Prize in economics in 2013, Alex Tabarrok at Marginal Revolution explained his intellectual bent:

... most people who think that markets can be inefficient are anti-market. Shiller’s solution to market problems, however, is more markets!

So we probably should not be surprised that Shiller thinks the outlandish products of contemporary financial markets can help with climate adaptation. He wants more opportunities for Wall Street to make money from global catastrophe.

...global warming needs to be addressed by the private institutions of risk management, such as insurance and securitization. They have deep experience in smoothing out disasters’ effects by sharing them among large numbers of people. The people or entities that are hit hardest are helped by those less badly damaged. ...

We already have weather derivatives that can help, like the 50 contracts in 13 countries offered by the Chicago Mercantile Exchange. A ski resort can already buy protection against inadequate snowfall and a city can buy protection against too much snowfall next winter by, in effect, taking the opposite side of the same futures contract (through the exchange), thereby pooling their opposite risks. There are also catastrophe bonds, like the three-year, $1.5 billion Everglades Re Ltd. issue sponsored this month by the Citizens Property Insurance Corporation. It would provide relief to the insurer of Floridians hit by a bad hurricane; in such an event, the bond holders would bear losses.

...We have a crucial need to bring innovation to our risk-management institutions. We need to make them flexible, to clarify their long-term international legal status, to develop mechanisms and indexes that can be the basis of long-term risk management contracts and to educate the public about them. Most important, we need concrete action now to build a mechanism that will provide real help for the victims of climate-change disasters.

Shiller is obviously a brilliant guy, looking for a decent response to crisis from the sector of social activity that is his area of expertise. I find this sort of financial gamesmanship repulsive. I cling to an instinct that human beings were made for cooperation, not competition gone feral. But climate crisis will take all kinds.
Posted by janinsanfran at 7:00 AM