Warming Wednesdays: checking in on the California drought

“Climate change, once considered an issue for a distant future, has moved firmly into the present,” the scientists declared in a major new report assessing the situation in the United States.

No, we can't say any particular weather phenomenon is certainly a direct consequence of global warming. But there sure are a lot of anomalies these days, among them the deep drought in California.

If you live in California, you might think: hey, it rained quite a lot last month -- haven't water conditions improved?

No, the drought is not over and April rains barely made a dent in the water shortage according to "Weather Historian" Christopher C. Burt at the Wunderground.

The water season (July 1-June 30) has, for all practical purposes, come to an end for California. Although May and June may see some additional precipitation (especially in the far north) it is unlikely that anything will happen to improve the prospect of a catastrophic drought this year for the state. ...

The final snow survey in the Sierra Nevada was taken on May 1st and the statewide snowpack was just 18% of average for the date. This compares to 32% as of April 1st. The situation in the northern section of the survey area was just 7% of normal. This is the 2nd lowest snowpack figure for May 1st (May 1, 1977 being the lowest on record).

Apparently the snow that fell in April melted right away because of generally sunny days and already warm conditions. We're still going to be parched. 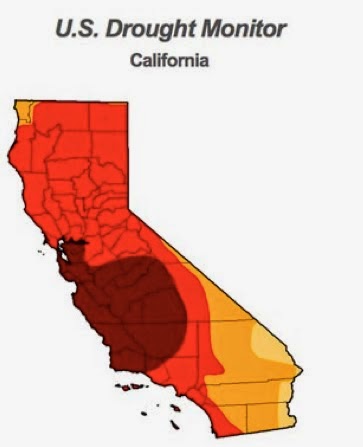 The bottom line is that the rainy season is over and the next six months are going to be a severe test of the state’s ability to manage its meager water resources. We will probably see (and already are) clashes between agricultural concerns and urban consumers. The specter of an horrific fire season also looms over all this.

It has been 37 years since a drought of this severity has affected the state and since the drought of 1975-1977 the population of California has almost doubled (from about 20 million to 38 million). The consumption of water resources by the agricultural industry has also dramatically increased. The only mitigating affect of these changes is that per capita water consumption has decreased thanks to a number of conservation innovations and regulations.

We are reminded we live in a natural desert.

Actually quite a few weather events have been formally attributed to global warming.

And, in the most rigorous perspective EVERY weather event is now affected by climate change since global warming has fundamentally changed the background condition from which all weather events emerge.

More particularly, for the California drought, climate change has been explicitly fingered as a cause, in two different ways

1) Climate change made the drought more severe. We had a record breaking warm winter here in California, and it didn't just break the record, it shattered it, going way beyond the old record. Warm air melts the snow pack and dries out the soils.

2) Climate change helped to create the drought in the first place. Global warming has been formally attributed as driving the "ridiculously resilient ridge" which blocked storms from reaching the state.