"I hope we shall all go to Heaven together. "

Here's another tidbit from U.S. history that I've encountered for the first time while reading The Founding Fathers (American Presidents). Perhaps every school child knows about this, but I'd never heard before of Abigail Adams' report to her husband, the second U.S. president, about how she'd dealt with a neighbor who had attacked "the principle of Liberty and equality." From the web archive of the Massachusetts Historical Society, here's her 1797 letter: 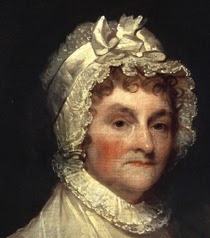 I have been much diverted with a little occurence which took place a few days since and which serve to shew how little founded in nature the so much boasted principle of Liberty and equality is. Master Heath has opend an Evening School to instruct a Number of Apprentices Lads cyphering at a shilling a week, finding their own wood and candles.

James desired that he might go. I told him to go with my compliments to Master Heath and ask him if he would take him. He did and Master Heath returnd for answer that he would. Accordingly James went.

After about a week, Neighbour Faxon came in one Evening and requested to speak to me. His Errant was to inform me that if James went to School, it would break up the School for the other Lads refused to go.

Pray Mr. Faxon has the Boy misbehaved? If he has let the Master turn him out of school.

O no, there was no complaint of that kind, but they did not chuse to go to School with a Black Boy.

And why not object to going to meeting because he does Mr. Faxon? Is there not room enough in the School for him to take his seperate forme? Yes. Did these Lads ever object to James playing for them when at a dance? How can they bear to have a Black in the Room with them there?

O it is not I that object, or my Boys. It is some others.

Pray who are they? Why did not they come themselves?

This Mr. Faxon is attacking the principle of Liberty and equality upon the only Ground upon which it ought to be supported, an equality of Rights. The Boy is a Freeman as much as any of the young Men, and merely because his Face is Black, is he to be denied instruction? How is he to be qualified to procure a livelihood? Is this the Christian principle of doing to others, as we would have others do to us?

O Mam, you are quite right. I hope you wont take any offence.

None at all Mr. Faxon, only be so good as to send the young men to me. I think I can convince them that they are wrong. I have not thought it any disgrace to my self to take him into my parlour and teach him both to read and write. Tell them Mr. Faxon that I hope we shall all go to Heaven together.

Upon which Faxon laugh'd, and thus ended the conversation. I have not heard any more upon the subject.

President John Adams is a very problematic figure. His biographer in this series, John Patrick Diggins, is more appreciative of his political thought than I might be. But Adams' early adherence to abolition of Black slavery -- in which Abigail obviously concurred -- makes him more sympathetic today than he might otherwise seem.