We're a murderous species with a capacity for virtue 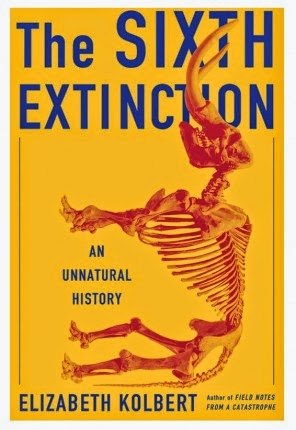 Elizabeth Kolbert's The Sixth Extinction: An Unnatural History is one scary book. New Yorker stalwart Kolbert wandered the world, interviewing scientists, accompanying their expeditions into remote environments, and listening to their conclusions:

"One-third of all reef-building corals, a third of all fresh-water molluscs, a third of sharks and rays, a quarter of all mammals, a fifth of all reptiles, and a sixth of all birds are headed toward oblivion ... And the losses are occurring all over: in the South Pacific, in the North Atlantic, in the Arctic and in the Sahel, in lakes and on islands, on mountaintops and in valleys.

This book is not another plea that we humans recognize human-caused climate change, though it certainly includes that message. Rather, this book documents that human activity, the ordinary life of our inventive, fertile species, has been and continues to precipitate a mass extinction event of an order of magnitude seen only five previous times in planetary history. That's what we do, mostly inadvertently; we kill off other living things; we might be on the way to killing ourselves off too.

I want to pull out a few conceptual frames that are important in Kolbert's narrative, not so much because they are novel, but because they are helpful to understanding what we can know about the world we live in. Kolbert is not sanguine about the future we are creating. She concludes the book with a review of what is known about our ancestor's successful extermination of large animals in the Americas, our present pressure on the few remaining large mammals in the present, and finally, our apparent elimination of close cousin humanoids -- the Neanderthals -- some of whose DNA we carry.

Though it might be nice to imagine there once was a time when man lived in harmony with nature, it’s not clear that he ever really did. ...

... As soon as humans started using signs and symbols to represent the natural world, they pushed beyond the limits of that world. ...

Yes, this is a scary book. And there can be no question that, unless we deflect ourselves, humans are on a glide path to mass extinction that includes our own. Much destruction is already underway, irreversible. Should we choose to survive what we have made, we'll need to cultivate and make actual the sort of virtues that human thinkers have propounded from ancient times: courage, practicality, prudence, hope and faith. Mere glibness and self-interest aren't enough.
Posted by janinsanfran at 5:00 AM