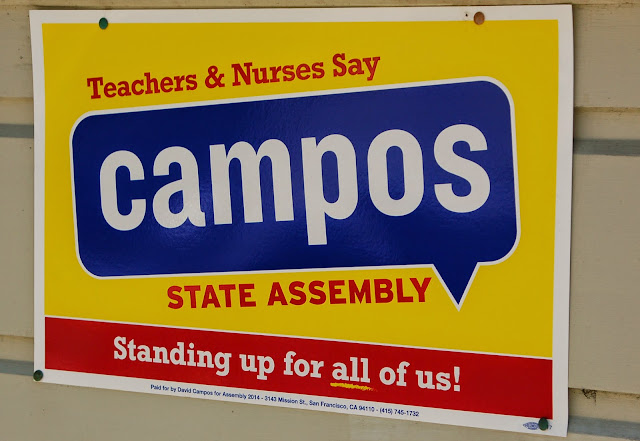 San Franciscans living in the 17th Assembly District have been exceptionally fortunate in our representation in Sacramento. Tom Ammiano is the termed out incumbent; you might think an outrageous queer comic would be just marginal in the state capitol, but you'd be wrong. After 14 often difficult years on the San Francisco Board of Supervisors which included shepherding a local health insurance plan through that body, Ammiano matured into an exceptional legislator. At the state level, he not only stood up for legalizing pot when such an initiative wasn't cool, but also sponsored a bill of rights for domestic workers, new restrictions on use of solitary confinement by state prisons, protections for transgender students, and the Trust Act to get California out of the business of helping federal agents deport innocuous immigrants.

Tom Ammiano is a conviction politician who works for a better, more fair society because he knows in his gut what it is like to be on the wrong end of harmful discrimination.

The 17th Assembly District can elect another individual who runs for office out of something deeper than personal ambition: David Campos. Campos succeeded Ammiano on the Board of Supervisors. He too is gay; he's an immigrant from Guatemala, a lawyer, a smart policy guy. He's also endorsed by Ammiano. But above all, Campos knows why he wants to go to Sacramento:

“It’s not all about the legislation you pass, it’s about the social change you effectuate.” And he noted: “With this David, you don’t need a lobbying effort to get me to do the right thing.”

As Campos indicates, there's another David in this race, David Chiu, also from immigrant roots. Chiu has been on the Board about as long as Campos; he's shown himself to be an ambitious pol. He presents himself as someone who is "trying to work behind the scenes to get things done." I'm sure Chiu would be a reliable Democratic vote. But we can do better than send up just another time serving Democratic politician who makes a career of pleasing political donors. I've been lucky to be represented by someone who has moved the definitions of what is possible. I want another one of those. David Campos is my guy.
***
Because of our stupid "top two" voting system, these two guys will slug it out again in November. There's no Republican in this one.
***
There's another race on the June ballot where San Francisco voters could actually use the "top two" system to good effect. I often complain here that having Nancy Pelosi leading the Democratic caucus means San Franciscans have no real representation in Congress. Pelosi's main job means she owes her allegiance to the Party, not her constituents. She'll be re-elected overwhelmingly in November; no problem there. But instead of her token opposition being some anonymous Republican, if enough of us want to, we can make the indefatigable activist and Green Party stalwart Barry Hermanson the other candidate for Congress on the ballot in November. He'd get 10-15 percent, just as the Republican would. This would be a nice little demonstration, certainly worth a primary vote.
***
Looking at the ballot, there's Leland Yee's name at the top of the list for Secretary of State. Too bad about that one. I would have voted for him if the bribery and gun running caper hadn't come out. He was never a reliable progressive, though he usually came through for the unions. But generally I think progressives gain from having statewide officials come out of the politics of this town. We knock 'em around in a good way; when they move up in the world, they look like flaming liberals to many people. The political culture here is good for them. Too bad about Leland.
Posted by janinsanfran at 7:00 AM