Walmart execs game their own game 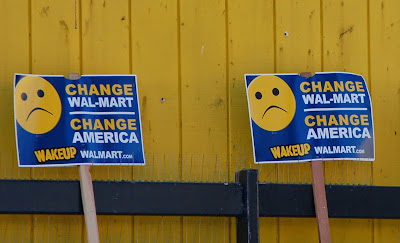 This is bit of a postscript about that fine retailer the Prez dropped in on last week. I thought I was beyond being shocked by the shenanigans of our corporate betters, but this is rich indeed.

It seems Walmart didn't report a very profitable business last year. After all, in our slack labor market in which even people with jobs aren't doing very well, Walmart's customers have cut back. But executives shouldn't have to do the same, should they?

Each year, when measuring top executives’ performance for pay purposes, the company says it makes various “adjustments” to its recorded financial results. In 2014, those adjustments resulted in better performance than reported in the audited statements. That enhanced performance meant higher incentive pay for executives.

... This year, the company included far more adjustments than in recent years. The impact of 11 “significant” items — including store closings, delays in store openings and the sale of operations — was eliminated from its results. In each of the four previous years, the number of adjustments never exceeded five.

After adjusting for certain items relating to the company’s sales, the Walmart unit eked out a growth rate of 2.03 percent in 2014. On the strength of that “adjusted” performance, Mr. Simon received $1.5 million, the proxy noted. His total compensation was $13 million last year.

... What adjustments helped Mr. Simon clear the bar? One action that the company took was to eliminate the decline in its United States sales that occurred after the government cut food stamp benefits — formally known as the Supplemental Nutrition and Assistance Program, or SNAP — by 5 percent last November.

That reduction in benefits hurt Walmart’s sales, the company acknowledged, because many customers use food stamps in its stores. But for executive-pay purposes, that sales decline never happened. And that meant a bigger payday for Mr. Simon.

Morgenson, one of the fine reporters around, simply read Walmart's annual report to shareholders. Their little accounting trick was there for all to see. Nice job, Mr. Simon, overcoming the consequences of people being forced to eat less by skinflint Republicans.
***
Think I'm being too hard on the Prez for speaking at Walmart? You might want to check out Stacy Mitchell's response to the speech and photo op from Grist.

Walmart — despite its skill in attracting publicity like this — is a laggard on renewable energy and one of the biggest and fastest-growing climate polluters on the planet. While many competing retailers are already running on 100 percent renewable power, Walmart’s wind and solar projects supply just 3 percent of its U.S. electricity — and that’s down from 4 percent two years ago.

As a city dweller, I don't think much about another aspect of Walmart's impact. But the other day I sure did notice I'd entered a sea of parking lots.

Why are we now burning so much more fossil fuel to move retail goods? There are multiple reasons, but many of the most important factors are rooted in the rise of Walmart. Aided by government subsidies and favorable zoning policies, the explosive growth of this chain and others like it has radically transformed retailing, changing both how goods are distributed and how people shop for them.

One of the biggest changes has been a sharp increase in the number of miles Americans drive for shopping. Growth in shopping-related driving has far outpaced increases in driving for all other purposes. “The retail industry has consolidated, going from about nine stores per thousand residents in 1970 to less than four per thousand residents in 2009,” the study explains. “This phenomenon … began with the rise of the department store and concluded with the widespread presence of Big Box retail.” Fewer stores per capita means most people have to drive a little further to get what they need. U.S. households now log an average of 2,200 miles more a year to shop than they did in 1969.

This corporation is no environmental model, Mr. President!
Posted by janinsanfran at 5:00 AM

I like the way you research these matters and pull out the relevant quotes. It is true that Wal-Mart is about 99% pernicious. But so are all the other big box stores. I would really not have a problem with these places if they would provide transportation for customers and keep the compensation for their top employees in check.
It's all facts on the ground, alas, and no matter how much one would wish it suburbia is not dead.