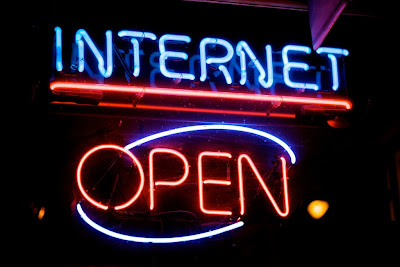 Anyone who reads here knows that I have mixed feelings about my Congresscritter, House Minority Leader Nancy Pelosi. On the one hand, I'd be nuts not to admire her grit, her dominance in an institution filled with delusional ego maniacs (of both parties), her determination to make those clowns listen to a strong woman. On the other hand, she frustrates me because ever since she became Speaker in 2006, I've felt as if I didn't have Congressperson -- Pelosi works for her House caucus and her political party. The urgent opinions of her constituents, way to the left of both entities, receive only grudging acknowledgement.

But about two weeks ago, I was surprised to see that her constituent email was calling on us to chime in against President Obama's own Federal Communications Commission (FCC) chairman's apparent intent to allow the internet to be sold to the highest corporate bidder. Here's some of the email.

The Federal Communications Commission (FCC) recently released a new draft proposed rule on protecting the open Internet. Press accounts of the draft proposal from the FCC raise serious concerns that the Internet might soon lose the core of what it is – an open space for innovation, entrepreneurship, connection and communication. The FCC proposed allowing broadband providers to negotiate with content providers for preferential treatment of what content moves the fastest on the Web— a move that would dramatically reshape the Web experience for all consumers. The rules would effectively change net neutrality, the idea that your Internet provider must treat all Web traffic equally. Clearly, the American people believe in preserving an open Internet where anyone can bring an idea to the table without seeking permission or paying a toll to each internet provider.

Success should be founded on merit and good ideas; not on who has the deepest pockets. We must not allow broadband providers to relegate competing ideas, products, and services to slow, congested speeds.

I urge Internet entrepreneurs, experts, and users to contact the FCC to make their voices heard and urge the Commissioners to establish rules of the road that protect the freedom, entrepreneurship and openness that must always define the Internet and American innovation. By embracing principles of nondiscrimination and transparency, this proceeding will ensure that the internet continues to be an engine of innovation, job creation and free speech for all Americans.

My Congresswoman was rousing the masses! How unlikely! She even gave us a link where we could send comments.Well, goodness knows, I write Pelosi often enough, so it seemed only right to send my comments to the FCC. Here's what I tossed off:

The internet is an essential resource of our society. It was developed with government money -- our money! There is no reason why you should give away the right to determine access to it to corporations who will stifle innovation, creativity and free speech.

The courts have indicated you can do what you should have done originally: declare the internet essential telecom infrastructure, a common carrier.

Not brilliant, but makes the point.

Now I send lots of emails, I sure didn't expect even a form letter in response. But here's what I -- and probably a few million other people -- received in reply:

Thank you very much for contacting us about the ongoing Open Internet proceeding. We’re hoping to hear from as many people as possible about this critical issue, and so I’m very glad that we can include your thoughts and opinions.

I’m a strong supporter of the Open Internet, and I will fight to keep the internet open. Thanks again for sharing your views with me.

Wheeler is a former Comcast lobbyist, not the sort of person I trust to muck with the internet. Let's hope he recognizes that when you go to work on the government side, you have to at least pretend to listen to aroused people.
***
For background on how powerful corporations have historically monopolized, homogenized, and defanged communications innovations, you can probably do no better than Tim Wu's The Master Switch.
Posted by janinsanfran at 7:30 AM

When you say you admire her "determination to make these clowns
listen to a strong woman," you're not including Dennis Kucinich when she squashed his legislation to cut off funds for the Iraq War,are you?