Aging with a delightful wise guy 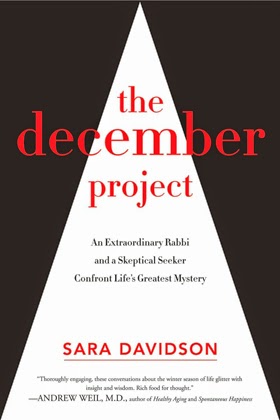 When I was a participant in the Catholic Worker movement in the 1970s, we were much drawn to the spirituality of Martin Buber's Tales of the Hasidim. Buber's stories of mystics and mysteries in Eastern European shtetls conveyed a delight in both ordinary humanity and the divine goodness that suited the generous, communal project in the midst of suffering within which we lived.

So I am not surprised that I have immensely enjoyed Sara Davidson's The December Project: An Extraordinary Rabbi and a Skeptical Seeker Confront Life's Greatest Mystery. I remember Davidson as a second tier feminist novelist in the 70s, author of Loose Change, a title that distinguished itself for the time by caring about the lives of (white, middle class) women. (Sorry Sara -- perhaps I thought that novel second tier because I was a lesbian, somewhat embattled in that decade.)

Her current book is the record of her conversations and deliberations about aging with Rabbi Zalman Schachter-Shalomi, an escapee from the Holocaust, a Hasid who struck out in his own direction, the founder of the Jewish Renewal Movement, and simply a delightful, wise old guy. I'm not sure Davidson is quite as much a skeptic as the title implies, but certain kinds of wisdom are perhaps better simply experienced than measured and evaluated in the style of a modern "skeptic."

I particularly appreciated Rabbi Zalman's account of how he learned that much as he "loved" women (four wives over a long life and a goodly number of adventures along the way), he was missing what the women felt:

Always a great appreciator of women, Zalman brought the feminine sensibility to the forefront in his work. He was startled, then, when a woman in the Aquarian Minyan told him he was a male chauvinist. "How could that be?" he asked. When he next led a service and gave a teaching, he asked her to raise her hand if he said something chauvinistic. By the end of the talk he felt paralyzed; he couldn't say a sentence without her hand shooting up.

The problem, he realized, is that male supremacy is embedded in the liturgy, not just in Judaism but in other faiths. He made a point of replacing masculine words like "father" and "king" with neutral ones like "creator" and "source," but that was just the first step in removing male bias.

In 1976, he was invited to be on an interfaith panel of gurus, priests, and swamis, organized by the Sufi leader Pir Vilayat Khan. A man in the audience asked them if men should ejaculate while making love, or would that cause them to lose vital energy? As Zalman remembers, "It was all men on the panel, and they were saying, "No, you should not ejaculate because it said in this text . . . rum da rum da rum . . ." Zalman signaled to the moderator that he wanted to speak. "You always go to the men," he said. "Why don't you ask what it means for the women?" The females in the audience broke into applause. ...

Yes, learned male religious leaders have long debated such "issues" -- the struggle to pre-empt them is not over, though in many contexts it has probably advanced since Zalman's awareness that we are actors in our own lives brought the house down on that occasion. Talking about God's will can't be left to guys, even really nice ones.

The title of the book, The December Project, refers to Zalman's efforts at 89 to come to terms with the end of life. He fiercely rejects the spiritual advice that so often hits the best seller list, the counsel to just "live in the moment."

"I've heard all that, and I will march with a placard that says '[Such advice] is full of shit!'"

"I live in a larger place than the moment," Zalman said. "I live in a timeline, and I belong to a historic tradition. We have Abraham in the past and the Messiah in the future. If people did not have hope for the future, they would have given up a long time ago. ... we are historic beings," he said, gathering steam. "We need to connect to past and future also. This is where Judaism is very good -- with the concept of tikkun olam, repairing the world. ... You're not obligated to complete the job, but you're obligated to do your part. Unless you can say that besides being in the moment, you're a cell on the planet and you have responsibilities to your family and your community, I'm not buying it!"

I like this gentleman. You take your inspiration in bits and pieces where you can find it.
Posted by janinsanfran at 7:00 AM