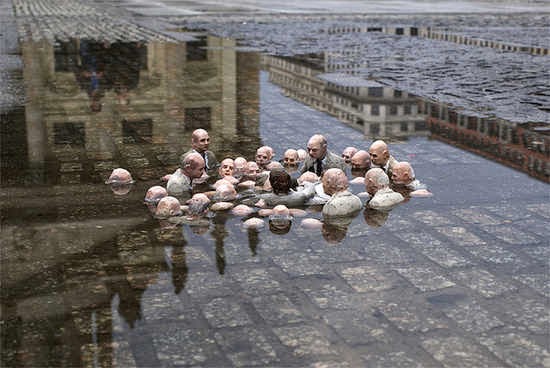 This sculpture by Issac Cordal in Berlin is called "Politicians discussing global warming." Via Sierra Club

If you are not deaf, dumb, blind and incurious (or a Republican), you know that human-caused global warming is rapidly altering the planet we live on. Human ingenuity, greed, and ignorance are causing changes so rapid that a recognizable habitat for us and everything else may not survive this century. Why just today, we read that a large segment of the Antarctic ice shelf is collapsing, meaning higher seas that will drown many coastal areas within the lives of today's young people.

Several years ago, I felt I had to devote at least one day a week of this political/reflective blog to global warming in response to the imperative that we come to grips with what our species and our social systems were doing. That intent had at least the benefit of forcing me to read a lot more popular science than I would have without it. When I started, these posts got the lowest number of clicks of any in a week; now they get the most. This is no huge spike, but it seems real.

Despite this relative interest, 144 posts later, I'm retiring this section tag. We know. The question becomes what are we going to do about it; what are we socially, spiritually, and politically capable of doing about warming and its many accidents?

As well as my many other concerns, I'll continue to write about these issues, probably mostly about their political implications, since that's my area of experiential expertise. But instead of a weekly post on climate change developments, I'll write whenever and however seems appropriate/needed/I have something to say. From here on in, these posts will probably mostly be tagged "sustainability," "climate," "annals of the anthropocene," or whatever else seems required. I'm not "giving up" -- destructive as we naked apes are, persistent and determined are also part of what it means to be human.
Posted by janinsanfran at 5:00 AM

Email ThisBlogThis!Share to TwitterShare to FacebookShare to Pinterest
Labels: annals of the anthropocene, warming wednesdays

I heard Limbaugh for the usual 5 minutes (less this time) as he again tried to deny it happening for his clueless crew. He said there is no proof of the earth warming at all in the last 17 years. I am sometimes amazed, when I should not be, at their blatant dishonesty. Then there was Marco Rubio's take that if it is happening, we didn't do it and even if we did, it's now too late to do anything about it. So wait long enough on stalling and then nobody should ask for changes as can't stop it anyway. An actual climate expert said we can make the difference between a three foot rise and a fifteen foot or some such number. It's nuts what has happened to the right wing.

I wish I knew anyone, myself included, who was not contributing to global warming. So I guess I have to adopt the "liberal" attitude, with its taint of hypocrisy, and do what I can. Probably keeping household costs down is the way to go for most of us. Consuming less and using more renewables.