A disappointing history of the post-war United States 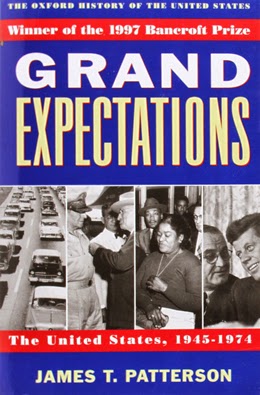 Almost inadvertently, I find that I am working my way through the so-far published volumes of the Oxford History of the United States, twelve segments by distinguished US historians that seek to encapsulate this country's brief existence. Every one I have read thus far has been a rich, thought-provoking experience; I'll append a list of my blog commentary on them at the end of this post.

That is, every book was rich until the most recent one I took up: James T. Patterson's Grand Expectations: The United States, 1945-1974. Published in 1996, I found this volume shockingly shallow. Perhaps because the events he describes were within recent memory (heck, they are mostly in my memory), Patterson adopted what the journalism scholar Jay Rosen calls "the View from Nowhere." What Rosen describes in journalism is very much what Patterson does as an historian:

... the View from Nowhere is a bid for trust that advertises the viewlessness of the news producer [or historian]. Frequently it places the journalist between polarized extremes, and calls that neither-nor position “impartial.” ... it’s an attempt to secure a kind of universal legitimacy that is implicitly denied to those who stake out positions or betray a point of view.

Grand Expectations (catch the implicit distancing of vantage point in the title) tries to capture its eras' many upheavals as if through a telescope located in a far off land. Essentially Patterson charges post-World War II citizens of the US with riding along on an unexamined wave of buoyant optimism and crashing on a rocky shoreline of reality in the late 1960s and 1970s.

Even if true in some grand sense, this is not good enough. Don't some of the incidents of the era actually matter in themselves, particularly the nuclear stand-off of the Cold War, the civil rights eruption (not yet completed), the failed war in a country on the Asian mainland that defeated the mighty US military? "On the one hand; on the other hand" treatment just doesn't suffice. Here's a sample of Patterson's style, describing what evidence is available as to President Harry Truman's feelings about having okayed dropping US atomic bombs in Japan.

Truman, sailing back to the United States from a deadlocked meeting with the Soviet Union at Potsdam, seemed unconcerned. "This (the bombing of Hiroshima) is the greatest thing in history," he told the crew members on the ship. The sailors, foreseeing the end of the war, cheered. But Truman was probably more uneasy than he let on. After learning of the first successful test of the A-bomb, at Alamagordo, New Mexico, on July 16, he had written in his diary, "I hope for some sort of peace -- but I fear that machines are ahead of mortals. . . . We are only termites on a planet and maybe when we bore too deeply into the planet there'll [be] a reckoning -- who knows?"

It's nice to know that Truman was a reflective sort, but what does the historian think of all this, not personally exactly, but in the consequences to life in the subsequent decades, if he thinks there were any? That's what always seems to be lacking in this volume.

"Rising expectations" simply seems a peg too small, too morally vacuous, upon which to hang developments such as demands for African American freedom, the women's movement, Latino empowerment, Native American rights, even for gay liberation, that broke through in these decades. It's not good enough to capture the social rupture over the war in Vietnam or the contempt for historic rule of law revealed in Watergate. The trajectory of this era was not always ethically glorious. Especially in its second decade, the story was of heated arguments over the moral essence of the United States, if any. In Patterson's volume, all that that is flattened.

To my horror, Patterson has written a subsequent volume in the Oxford series about the period 1975-2000. If Grand Expectations could only cope with the post war period by ironing out its heat and light, I can't imagine how empty a treatment of subsequent, nearly contemporaneous conflicts would be from this author. This next book I'll take a pass on.

Posts derived from reading in the Oxford History of the United States:
On Robert Middlekauff's The Glorious Cause: The American Revolution, 1763-1789

On James M. McPherson's Battle Cry of Freedom: The Civil War Era, I've only begun to digest this amazing treatment of the political, economic, and social history of the conflict that made us what we are, for the better in my view and McPherson's. Fragmentary commentary here, and here.

On David M. Kennedy's, Freedom from Fear: The American People in Depression and War, 1929–1945
Posted by janinsanfran at 7:00 AM

Wow. You have read so much U.S. history. I am going to look at all your links later.

It's true that I've read a lot of history. This is less surprising perhaps because I was on track to be an historian until I realized I was more interested in making history than studying it.

As a student, I was something of a snob. I neglected US history, so these days I feel as I were catching up with the background I lack.