Benchmarks after this election 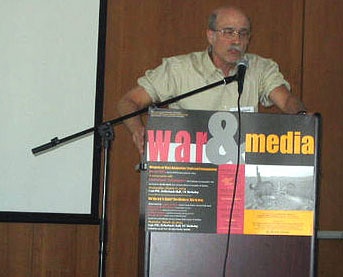 I like benchmarks. Last year I posted Van Gosse's list of signs that the peace movement was succeeding and have referred to them frequently since. Interestingly, they now suggest to me that what we needed was a more nuanced understanding that a contemporary peace movement might look very different than the 1960s one -- but that too is utility. (See this for example.)

Today Tom Engelhardt offered his commentary on the implications of Tuesday's elections, Plebiscite on an Outlaw Empire. Every bit of this long exposition is worth reading and pondering, but I want to share here my abbreviations of his concluding questions.

Here, briefly, are five "benchmark" questions to ask when considering the possibilities of the final two years of the Bush administration's wrecking-ball regime:

Will Iraq Go Away?... Yesterday's plebiscite (and exit polls) held an Iraqi message. It can't simply be ignored. But nothing will matter, when it comes to changing the situation for the better in that country, without a genuine commitment to American withdrawal, which is not likely to be forthcoming from this President and his advisors any time soon. So expect Iraq to remain a horrifying, bloody, devolving fixture of the final two years of the Bush administration. It will not go away. Bush (and Rove) will surely try to enmesh Congressional Democrats in their disaster of a war. ...

Is an Attack on Iran on the Agenda?...If Iran is to be a target, 2007 will be the year. So watch for the pressures to ratchet up on this one early in the New Year. This is madness, of course. ...Failing empires have certainly been known to lash out or, as neocon writer Robert Kagan put the matter recently in a Washington Post op-ed, "Indeed, the preferred European scenario [of a Democratic Congressional victory] -- 'Bush hobbled' -- is less likely than the alternative: ‘Bush unbound.' ..." So when you think about Iran, think of Bush unbound.

Are the Democrats a Party?...Unlike the Republicans, the Democrats in recent years were not, in any normal sense, a party at all. They were perhaps a coalition of four or five or six parties (some trailing hordes of pundits and consultants, but without a base).... They have a genuine mandate on Iraq and a mandate on oversight. What they will actually do -- what they are capable of doing (other than the normal money, career, and earmark-trading in Washington) -- remains to be seen. They will be weak, the surroundings fierce and strong.

Will We Be Ruled by the Facts on the Ground? In certain ways, it may hardly matter what happens to which party. By now -- and this perhaps represents another kind of triumph for the Bush administration -- the facts on the ground are so powerful that it would be hard for any party to know where to begin. Will we, for instance, ever be without a second Defense Department, the so-called Department of Homeland Security, now that a burgeoning $59 billion a year private "security" industry with all its interests and its herd of lobbyists in Washington has grown up around it? Not likely in any of our lifetimes. Will an ascendant Democratic Party dare put on a diet the ravenous Pentagon, which now feeds off two budgets -- its regular, near-half-trillion dollar Defense budget and a regularized series of multibillion dollar "emergency" supplemental appropriations, which are now part of life on the Hill. .... So, from time to time, take your eyes off what passes for politics and check out the facts on the ground. That way you'll have a better sense of where our world is actually heading.

What Will Happen When the Commander-in-Chief Presidency and the Unitary Executive Theory Meets What's Left of the Republic? ... when the new Congress arrives in January, buckle your seatbelts and wait for the first requests for oversight information from some investigative committee; wait for the first subpoenas to meet Cheney's men in some dark hallway. Wait for this crew to feel the "shackles" and react. Wait for this to hit the courts....

Dire thoughts, but questions I'm sure I'll return to over the next year.
Posted by janinsanfran at 10:40 PM