By gosh I think we did it...
It's Congressman McNerney 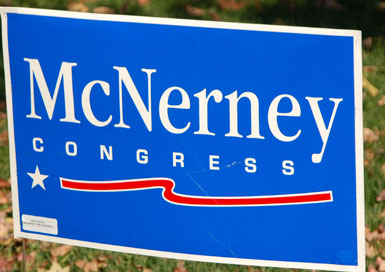 12:13 a.m. This may be premature, but at 74 percent of the precincts counted, Democrat Jerry McNerney is holding a 3-4,000 vote margin over Republican Congresscritter Richard Pombo. His margin has held since the beginning of the count. And fully 80 percent of the San Joaquin County results, where Pombo was pretty certainly to lead, have come in. There, Pombo leads by only about 2,000, while McNerney leads in Alameda, Contra Costa and Santa Clara counties by enough to surpass Pombo's San Joaquin. And those other counties haven't reported as large a fraction of their votes as San Joaquin. Could decency and sanity be about to defeat corruption and arrogance?

Hey -- maybe I'm about to be proved wrong. I didn't think any Democrat who wasn't named Machado could win this district.

It's been a long time since I worked, even briefly and peripherally, on a tough winning campaign -- I guess Jeff Adachi's election as San Francisco Public Defender in 2002 was the last one. I've worked on so many worthy, necessary, but doomed campaigns that I'm shy about committing myself on the tough ones. But really, we can't expect good outcomes if we can't find the courage to throw down.

I didn't really throw down on this one, just worked a few shifts at the end. McNerney will make a good, thoughtful Congressman. Congratulations (prematurely, but I need to go to bed) to Jerry McNerney and all the hundreds of residents of House District 11 who gave months of their lives to the task of replacing their corrupt representative. 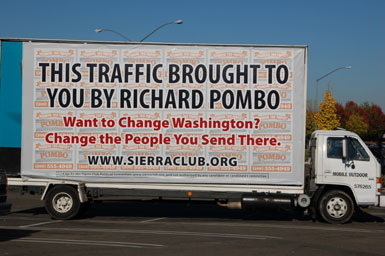 The Sierra Club helped too.
Posted by janinsanfran at 1:16 AM

A huge victory! Warmest congratulations from Virginia, where we're still pinching ourselves.

Democrats now have a majority in the House and Senate. The Webb and Tester victories are real, and will not be reversed. Barring the GOP making an offer to Lieberman he won't refuse (something I'm not ruling out), this was a victory beyond what I dared to hope for.

Three cheers for you and everyone who pitched in to get rid of the House's most bought-and-paid-for members. Woo-hoo!

Hello I want to congratulate to you. This site is fantastic, looks like entertained and very good to me it elaborated. I invite them to that they explore a little on my site of the Web
Our real estate listing includes great opportunities on Costa Rica Central Valley’s provinces such as San Jose, our Capital, with remarkable cities as Escazu at the west, or Curridabat at the east, experiencing a great development on both commercial and residential properties, making their real estate pricing highly attractive to investors; on other hand, Alajuela city gathers places with a very special warm weather such as Grecia, La Garita and Atenas, or beautiful farms for agricultural, cattle or nature preservation purposes as those located on San Carlos or Sarapiqui. We also offer land properties in Guanacaste, which is the province, along with Puntarenas, with the most beautiful tropical beaches on the Pacific Coast such as Tamarindo, Playa Grande, El Coco, Playa Hermosa, Nosara, Samara, Herradura, Jaco, Manuel Antonio, Dominical and Golfito, where the real estate business occupies the first place as the local economic activity.
Great investment opportunity at Costa Rica Pacific Coast, Preconstruction condos in costa rica
Condo sales in costa rica, Retirement property in costa rica. Visit us for more info at: http://www.costa-ricarealestate.com/